BRIEF MEMORIES OF MY LIFE AS A COLLECTOR OF COINS

In 1975-1976 I stayed for one year in Nepal´s capital Kathmandu, one of the most fascinating towns in Asia. At that time Kathmandu was still a quiet place with bicycles, rickshaws, a few taxis and buses as well as cows sharing the streets. I soon found out that Nepal was not only unique because of the Himalayan mountains and the architecture of the Kathmandu valley, but that it was a paradise for coin collectors. An intriguing series of early copper and medieval and later silver coins of Nepal could be found, along with coins brought by Tibetan refugees from their country as easy-to-carry valuables. Most of the coins could be found at small stalls of Kathmandu´s Durbar Square, which is dominated by the former Royal Palace and pagodas dedicated to Hindu gods. The coin dealers were sitting cross legged behind the more common coins heaped up in front of them. Once you had gained their trust by proving that you were a serious collector they would open the heavy safe standing on one side and show you their rare coins of Nepal and Tibet. Usually I picked out one or two pieces which I needed for my basic collection and bargained for a reduced price.

Soon I was fortunate to meet Alexander Lissanevitch, son of Boris, the latter being known as the person who first brought foreign tourists to Nepal and as owner of The Chimney, a restaurant located in an old Rana Palace and frequented by mountaineers and other foreigners as well as local residents. Alexander, although younger than me, was already an experienced collector and taking me to his home or visiting me at my apartment in Kamaladi, he introduced me to the coins and banknotes of Nepal and Tibet.

During a further six months’ residence in Kathmandu in the early 1980s I got to know the most important coin collectors and dealers: Bhupendra Narayan Shrestha (Kathmandu) and Ghanashyam Rajkarnikar (Patan). Nearly all rare Tibetan coins which reached Nepal passed through the hands of these two men. With the help of BN Shrestha I could build an extensive collection of Sino-Tibetan coins and complete other difficult series like the silver 5 sho coins. G Rajkarnikar sold several rare issues to me which were not available from Shrestha. I frequently spent whole afternoons with one or the other collector and during long conversations could learn very much about Tibetan and Nepalese coins. There are three other Nepalese coin dealers who contributed rare coins to my collection: these were Chaitanya Ratna Shakya, Purushatom Lal Shrestha and Hari Prasad Duwal.

After my second stay in Kathmandu I contacted western collectors, namely Gilbert Richardson (USA) who had bought coins in Nepal in the 1960s when prices still were very reasonable and who was working on a detailed variety catalogue of Tibetan coins, but passed away before finishing his work. The other two important collectors who I approached were the German veterinarian Karl Gabrisch who had published already some articles on Tibetan coins and paper money, and in 1990 organised an exhibition of Tibetan coins in Switzerland for which he wrote an extensive catalogue entitled Geld aus Tibet, which is still the most important book in the German language on this subject. I visited Karl Gabrisch several times in his hometown Mannheim while he encouraged me to get familiar with using a computer and start writing articles on Tibet´s money.

The other important collector who I contacted and eventually became very friendly with was Nicholas Gervase Rhodes from the UK, who had published several articles on Tibetan coins and was internationally recognised as the leading expert in Tibetan, Nepalese and other Himalayan coins. I consider both Karl Gabrisch and Nicholas Rhodes as being my major European gurus in the field of Tibetan and also of Nepalese coins. Both were friends of Carlo Valdettaro (Italy) who can be considered the spiritual “father” of most collectors of Himalayan coins. Together with Rhodes and Gabrisch Valdettaro is co-author of the important book, The Coinage of Nepal, which was published in 1987 and is used and admired by most collectors in this field. All three had formed great collections of Tibetan coins which were either bequeathed to the British Museum (Valdettaro collection) or sold in auction in 2005 (Gabrisch collection) and 2013 (Rhodes collection). Many of the rare coins in these collections were acquired from BN Shresta. I met Carlo Valdettaro only one time in his home in Lugano (Switzerland) where he patiently answered many of my questions and supplied photocopies of some of his notes re Tibetan and Nepalese coins.

Other foreign collectors who I have met in person or corresponded with were or are Wesley Halpert (his collection was sold by Spink in New York in 2000), Gylfi Snorrason, Klaus Bronny, Wilfried Klug, David Holler, Kris van den Cruyce, René van den Hooff, Wolfgang Schuster and John Hoag. At the Hong Kong auction of the Rhodes collection in 2013 I met the collectors from Beijing, Hao Zhai and his friend Adrian Zhang, who informed me about collecting Tibetan coins in China and with whom I am still in touch.

My collection, which is offered for sale by Spink, was mainly formed between 1980 and 2000 by purchases in Nepal, Tibet and India. Only a few pieces were acquired in auctions or obtained through exchange from other collectors, thus my collection was formed before most of the forged Tibetan coins reached the market, and all the coins offered therefore deserve the guarantee of being genuine. I have included only the scarce and rare items and left out the more common silver and copper coins of Tibet which may be offered in further auctions. It should also be mentioned that so far rare Tibetan coins have not reached the high price levels of rare Chinese imperial and republican silver coins, and have the potential to rise considerably in value.

Should I pick out three highlights of my collection I would mention the 10 tam pattern with the intriguing reverse design, featuring five emblems referring to the five senses; then the very rare and historically important Sino- Tibetan coin of the 57th year of Qian Long with the inscription pod kyi rinpoche, and last the Lukuan rupee which is exceptionally well struck and well preserved.

I hope that my coins will end up in good hands and provide the same satisfaction and pleasure which they have given to me for many years.

Banknote specialist Elaine Fung adds: The banknote portion of the collection is equally impressive, with many scarce types and plate notes illustrated in publications by Wolfgang. All early “woodblock” printing types are rare, and in this collection, the 10 and 50 tam stands out. Printed in bright pink and blue respectively with intricate designs and sacred imagery, Tibet’s thousand-years-long printing techniques are used to perfection as showcased here. All done by hand over 100 years ago, these two particular examples are extremely well preserved with little to no discolouration. Various error types also in the collection with missing seals, mismatch serial numbers etc. A full date run of the multicolour 50 tam are also offered. A set of the elusive 1939 Xikang Provincial Bank notes and a Tashi Dargyas Monestary ½ rupee rounds out the collection. . 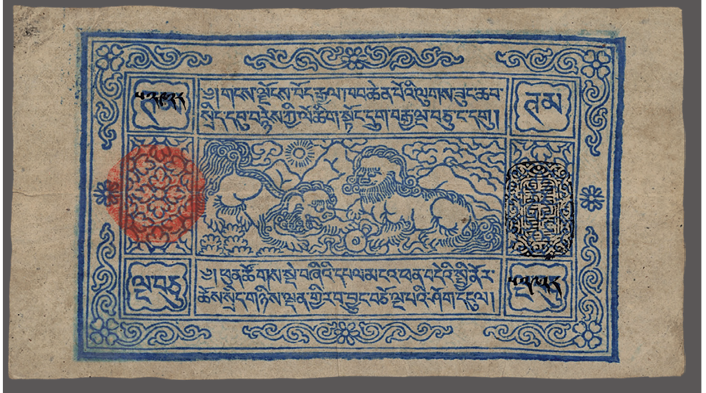 The Wolfgang Bertsch collection will be offered during Spink China’s numismatic auction week, running from 30th September to 5th October 2022. 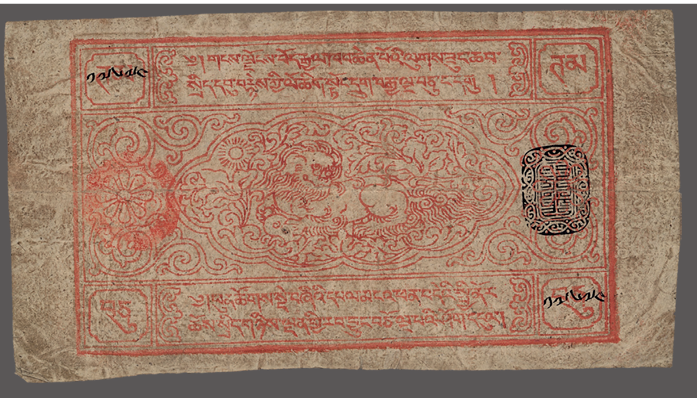