AN INTERVIEW WITH DAVID R SEAR 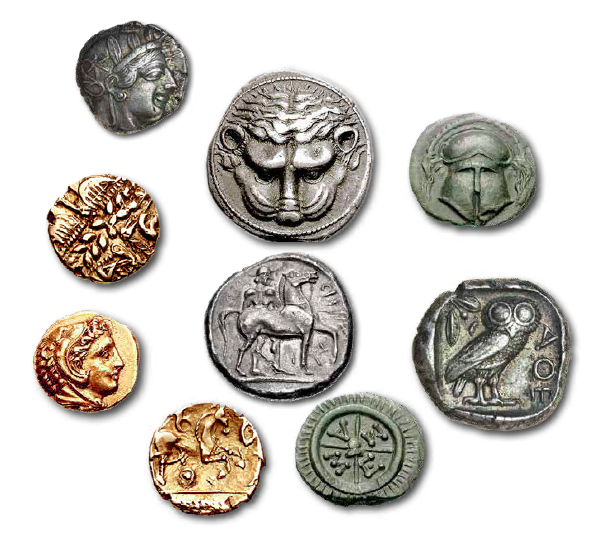 Ahead of David Sear’s much anticipated new release, An Introductory Guide to Ancient Greek and Roman Coins, Olivia Marshall from our book department asked the author to provide Insider readers with an insight into why the ancient coin-collecting community is still so prolific, and how we can encourage the next generation of numismatists. He began the interview by discussing what sparked his own affinity with coin collecting from a young age, and provided some context about the new publication:

“Growing up in England in the 1940s and 1950s my interest in classical history was initially stimulated by a school visit to the Roman city of Verulamium (present-day St Albans in Hertfordshire). I well remember being fascinated by the fragmentary remains of a civilisation that had existed almost two millennia ago in what was now a peaceful parkland setting with trees, fields and a lake. This visit had a profound effect on my imagination and inspired me to seek further information concerning our Graeco-Roman past.”

The subsequent gift of a late Roman bronze coin of the family of Constantine from an archaeologist friend of our family spurred a fascination for ancient coinage, though I had already been attracted by the display of Roman coinage in the Verulamium Museum. I considered the possibility of pursuing an academic career, but at the age of sixteen the opportunity arose to join the numismatic firm of BA Seaby Ltd in London’s West End as an

assistant in the Ancient Coin Department.

This seemed too good an opportunity to miss so I joined the company as a junior to the eminent Polish numismatist, Lt Col Juliusz Kozolubski. Our association lasted for six years until his death in 1964, after which I ran the Department for the following nine years before retiring to East Anglia to devote my time to writing.

My interest in books had begun at BA Seaby Ltd, which in addition to being a dealer in coins and medals was also a numismatic publishing house. In 1962/3 I took it upon myself to rewrite HA Seaby’s Roman Coins and Their Values and this was published the following year as my first book. A decade later I realised that I was more drawn to writing than buying and selling coins and between 1974 and 2014 I authored an extensive series of publications focusing on the coinages of ancient Greece, Rome, and Christian Byzantium. This new Introductory Guide to the Collection and Study of ancient Greek and Roman Coins is the latest in this series of numismatic publications and is the first in what will be a three-volume set. It covers the issues of the Greek cities and peripheral tribes from the late seventh to the late first centuries BC. The other two volumes will be devoted to the regal coins of the Hellenistic monarchies, successors to the vast conquests of Alexander the Great (late fourth to late first centuries BC) and to the coins of Republican and Imperial Rome (early third century BC to late fifth century AD).

“I would wholeheartedly encourage those individuals, young and old, with an inquiring mind to consider ancient numismatics as a worthwhile field of endeavour.”

The study of these miniature works of art provides the collector with an insight into the classical world of ancient Europe, the Near East, and North Africa. Increased fascination with these places and eras has resulted from the comparative ease and affordability of modern tourism and has stimulated an appetite for the acquisition of classical coins and antiquities. As demand grows the value of highly collectable pieces predictably increases and inevitably this has attracted a growing investor market to this field.

Although the majority of new publications on subjects related to ancient numismatics are of a specialised nature it has been my feeling that a more general introduction to the subject as a whole is needed to help the novice collector become better acquainted with what may appear to be a very complex and intimidating field of study. This is certainly a good time to enter this rewarding hobby as our knowledge of many aspects of ancient coinage has increased enormously over recent decades due in part to the discovery and publication of hoards in many parts of the Mediterranean world and northern Europe. Enthusiastic beginners in the twenty-first century are thus better equipped than earlier generations to gain a good basic knowledge of the subject in a comparatively short span of time. This is not to say that the acquisition of knowledge will not continue throughout his/ her lifetime. Even after more than 60 years of constant involvement in the field it is still no great matter of surprise to me when I come across 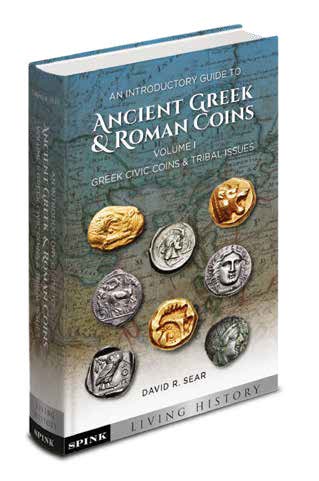 some fact of which I had not previously been aware. Such is the extraordinary depth of this subject.

I would wholeheartedly encourage those individuals, young and old, with an inquiring mind to consider ancient numismatics as a worthwhile field of endeavour. Not only is it a gateway into the broader subject of ancient
civilisations but it also may lead us to a better understanding of our past and, perhaps, our future.”

As David Sear suggests, the guide aims to offer an accessible entry into the world of ancient coins for new enthusiasts, to encourage new collectors of all ages. An Introductory Guide to Ancient Greek and Roman Coins (Volume I) will be available from Spink Books in late Spring – for further information or to purchase a copy please visit our website, www.spinkbooks.com, or email [email protected].