SOCIAL DISTANCING IN 1666: ORDERS FOR THE PREVENTION OF THE PLAGUE 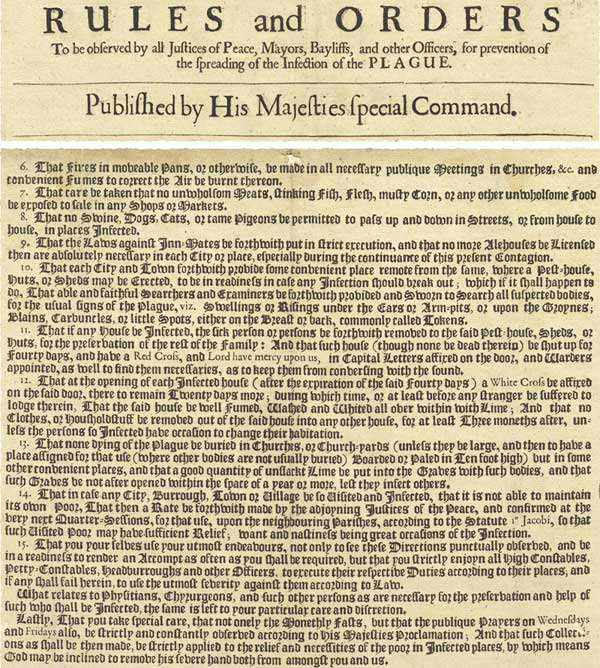 Most of you will know of Spink’s long and rich history, founded in the year of the Great Fire of London – a city which was only just recovering from the Great Plague. Charles II had been criticised for leaving London to escape the plague in 1665, having given orders to be observed by all Justices of Peace, Mayors, Bailiffs and other Officers for “prevention of the spreading of the Infection of
the Plague.”

Published by “His Majesties Special Command”, Orders 1-5 state that no stranger
was allowed to enter a town unless they had a certificate of health. No furniture was to be removed from an infected house. There were to be no public gatherings such as funerals, and all
houses were to be kept clean.

The National Archives’ transcript of Rules
and Orders 6-15 is as follows:

6. That Fires in moveable Pans, or otherwise, be made in all necessary publique [public] Meetings in Churches, &c. and convenient Fumes to correct the Air be burnt thereon.

7. That care be taken that no unwholsom Meats, stinking Fish, Flesh, musty Corn, or any other unwholesome Food be exposed to sale in any Shops or Markets.

8. That no Swine, Dogs, Cats or tame Pigeons be permitted to pass up and down in Streets, or
from house to house, in places Infected.

9. That the Laws against Inn-Mates be forthwith put in strict execution, and that no more Alehouses be Licensed then are absolutely necessary in each City or place, especially during the continuance of this

10. That each City and Town forthwith provide some convenient place remote from the same, where a pest-house, huts, or sheds may be erected, to be in readiness in case any Infection should break out; which if it shall happen to do, That able and faithful Searchers and Examiners be forthwith provided and Sworn to Search all suspected bodies, for the usual signs of the plague, viz. Swellings or Risings under the Ears or Arm-pits, or upon the Groynes [groin]; Blains, Carbuncles, or little Spots, either on the Breast or back, commonly called Tokens.

11. That if any House be Infected, the sick person or persons be forthwith removed to the said pest-house, sheds, or huts, for the preservation of the rest of the Family: And that such house (though none be dead therein) be shut up for fourty days, and have a Red Cross, and Lord have mercy upon us, in Capital Letters affixed on the door, and Warders appointed, as well to find them necessaries, as to keep them from conversing with the sound.

12. That at the opening of each Infected house (after the expiration of the said Fourty Days) a White Cross be affixed on the said door,
there to remain Twenty days more; during which time, or at least before any stranger be suffered to lodge therein, That the said house be well Fumed, Washed and Whited all over within with Lime; And that no Clothes, or Householdstuff be removed out of the said house into any other house, for at least Three months after, unless the persons so Infected have occasion to change their habitation.

13. That none dying of the Plague be buried in Churches, or Church-yards (unless they be large, and then to have a place assigned for that

“... if any House be Infected, the sick person or persons be forthwith removed to the said pest-house, sheds, or huts, for the preservation of the rest of the Family”

(where other bodies are not usually buried) Boarded or Paled in Ten foot high) but in some other convenient places, and that a good
quantity of unslakt Lime be put into the Graves with such bodies, and that such Graves be not after opened within the space of a year or more, less they infect others.

14. That in case any City, Burrough, Town or Village be so visited and Infected, that it is not able to maintain its own poor, That then a Rate be forthwith made by the adjoining Justices of the Peace, and confirmed at the very next Quarter Sessions, for that use, upon the neighbouring Parishes, according to the Statute 1 Jacobi [James 1], so that such visited poor
may have sufficient Relief; want and nastiness being great occasions of the Infection.

15. That you your selves use your utmost endeavours, not only to see these Directions punctually observed, and be in a readiness to render an Accomt [Account] as often as you shall be required, but that you strictly enjoyn all high Constables, petty Constables, Headburroughs and other Officers, to execute their respective Duties according to their places; and if any shall fail herein, to use the utmost severity against them according to Law.

What relates to Physitians, Chysurgeons, and such other persons as are necessary for the preservation and help of such who shall be Infected, the same is left to your particular care and direction.

Lastly, That you take special care, that not onely [only] the Monethly Fasts, but that the publique prayers on Wednesdays and Fridays also, be strictly and constantly observed according to his Majesties Proclamation; And that such Collections as shall be then made, be strictly applied to the relief and necessities of the poor in Infected places, by which means God may be inclined to remove his severe hand both from amongst you and us.

It seems strange that in 2020, over 350 years
later, many of these same methods are being employed to slow down and suppress the spread of the Covid 19 coronavirus. Indeed King Charles’s method of fighting the Great Fire of London by creating fire breaks – knocking down perfectly good buildings to starve the fire of the wood it needed to burn – can also be compared to the way in which governments worldwide are trying to break the chains of human contact which allowed Covid 19 to spread so rapidly. History yet again repeating itself – but yet again humankind will triumph over the horrendous hold it currently has on our world.