FROM THE EVERYDAY TO THE EXTRAORDINARY: ANN CARRINGTON

It was Ann Carrington’s slant on stamps and coins that first caught the attention of Spink, for very obvious reasons. The work and construction of each piece, however, is a tale of Ann’s background, her influences and her ever-evolving creative talent. A discussion and a visit to her Margate old rail goods yard studio was eye-opening and from there we are delighted to announce a major exhibition of Ann’s work at Spink, from 20th September 2021. Several pieces will also be on view at Stampex. 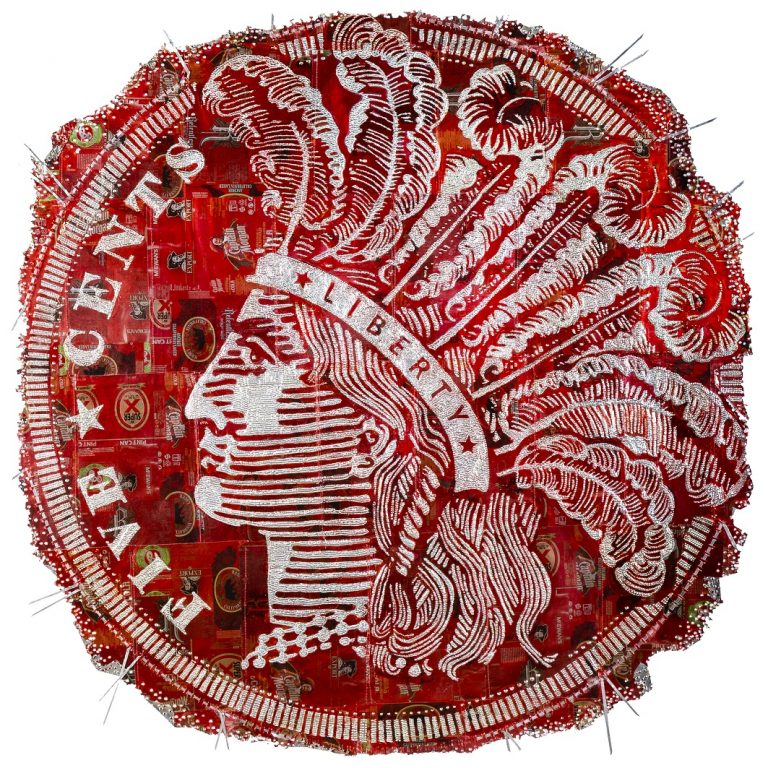 Ann creates pieces from everyday discarded items, whether that be cutlery, crushed tin cans, buttons, coins or anything else that appeals to her; I did see trumpets and metal beetles in corners of her workshop. I say workshop rather than studio because it is very much a place where things get made, altered, fashioned into beautiful art works. This is down and dirty work from hammering, to welding, to sewing. The huge stamp works and the large coin-encrusted sculptures are Ann’s flashback to her childhood and her fathers’ collecting of both, although at the time she found this rather dull – now the thrill of the designs on coins and the way in which she “dresses” the Machin Queen’s portrait on the stamps brings the past to life in a different way for her. This influence and her time spent in Zimbabwe on an exchange visit, where the use of used tin cans, bottle tops and other metal stayed with Ann, is now very much reflected in her “Piss heads” sculptures.

The marvellous bouquets made from old cutlery, Ann tells me, are inspired from a visit to the Rijks Museum in Amsterdam and looking at 17th century vanitas paintings. Memories of the past and the passing of time reflected in the pictures; fading flowers, half eaten food etc struck a deep chord. The only non-perishable items, she says, were the cutlery and it was that which Ann decided to fashion into her elaborate bouquets. We pass bags of spoons, which she buys by the kilo, on our way to the welding area; she explains each bag and the type of spoon and which flower it is perfect for making. Seated at the machine, she quickly demonstrates how involved it is and the skill necessary to construct the beginnings of a flower – there are 600 in the average bouquet! The Victoria and Albert Museum have one on display and Eric Turner, a curator in the Department of Sculpture comments, “It’s a startling use of redundant silverware, and I think it will stretch people’s imagination”.  It certainly does.

The exhibition at Spink will display the wide range of Ann’s work including the use of pearls and small buttons; the Pearly Queen series of Postage Stamps and the magnificent faux pearl galleons, the latter taking over a year on and off to complete. Perhaps her most famous work, a Royal Jubilee Banner of 2012, was commissioned to hang from the Royal Barge, The Spirit of Chartwell, for the Queen’s Diamond Jubilee celebrations. Over half a million buttons were used in its construction and over 2.5 billion watched the barge on its journey down the Thames.

If you wish to see the intricacies of Ann’s work and purchase one of her masterpieces there will be well over 20 works for sale and on exhibition from 20th September until the beginning of November at Spink’s London premises, 69 Southampton Row. For further information or commissions, please contact Tim Robson, [email protected], or 0207 563 4007.

Visit Spink | SHOP to view all artworks on offer