MARY GILLICK: THE WOMAN BEHIND THE QUEEN’S FIRST COIN PORTRAIT 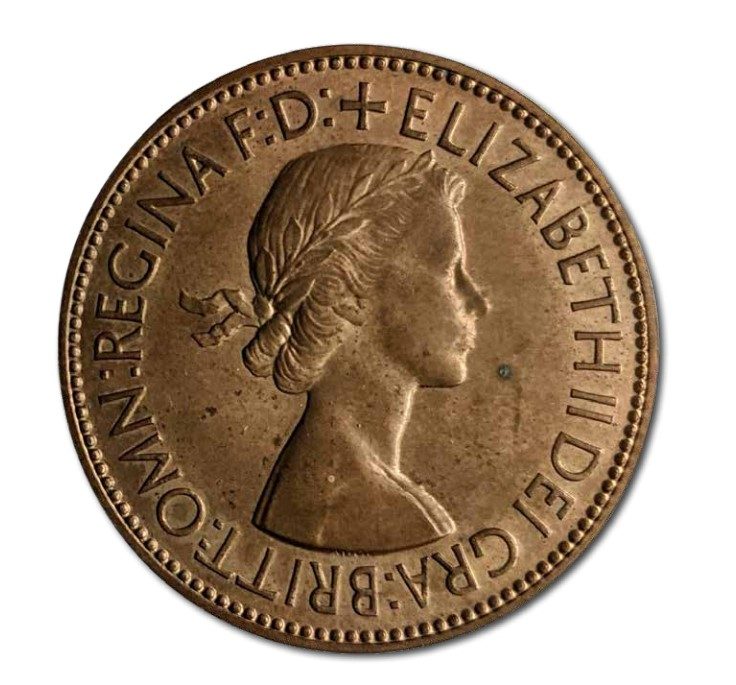 The Queen’s platinum jubilee is a cause for celebration not only in the United Kingdom but around the world. Much has been written – and will continue to be written – on the service that the Queen has given over seventy years. The longest serving British monarch in history certainly deserves to be feted and this is exactly what Spink, in partnership with the British Museum, will be doing this summer when it publishes a book to coincide with the jubilee. But although this book can be seen as a celebration of the reign, its primary purpose lies elsewhere, for its subject is not the Queen but another woman entirely. Mary Gillick sculptor and medallist examines the career of the artist best known to readers of The Insider as the artist responsible for the portrait of the Queen on her first coinage – a portrait that established a definitive iconography for the first decades of the new Elizabethan age. This is what makes it especially relevant to the jubilee. What were the influences on Gillick as an artist that made the first coins of Queen Elizabeth look as they did? This is just one of the questions that the book tries to answer, while an exhibition on Gillick running at the British Museum from 2 June to 31 July has a similar objective.

The British Museum, with its world-class collection, is well-placed to mount such an exhibition, and when it comes to Gillick it is particularly fortunate, for, following the death of the artist’s niece and heir in 2004, it was the recipient of a generous donation from the family in the form of a large amount of material relating to both Mary and her sculptor husband Ernest Gillick. This gift included medals by both artists, plaster models for various works by Mary including for the coinage, the many press cuttings that she received relating to that commission, and the letters of congratulation sent from friends and other admirers. At the same time the family gave to the Henry Moore Institute in Leeds a mass of archival material relating to the two artists’ larger works, accompanied by a substantial body of personal letters and diaries. Much of the contextual information that forms the basis of the book is derived from this rich source, with the objects in the British Museum providing the visual evidence of the Gillicks’ – and particularly Mary Gillick’s – long careers. It is these British Museum objects that also form the core of the exhibition, while the Henry Moore Institute has been generous in lending Gillick’s sensitive portrait drawings for two of the medals along with two of the photographs of Prince Philip that helped her with her medallic portrait of the prince.

Mary Gillick had been a professional artist for more than forty years when, in February 1952, George VI died and Queen Elizabeth acceded to the throne. The Royal Mint immediately held a limited competition for designs for the coinage that would now be required and worked throughout the following months to get the coins ready. During this time the identities of the artists concerned and the designs themselves remained a closely guarded secret and it is evident from Mary Gillick’s correspondence that, with only a very few exceptions, she kept the secret well. When the designs were released and the artists’ names announced in November 1952, the excitement was feverish and Gillick’s photograph was splashed across the front pages of the newspapers. That the artist who had designed and modelled the portrait was, like the monarch, a woman was a cause for much comment. That, unlike the Queen (who was 25 at the time of the accession), she was 71 was also a major subject of interest. That she was a widow – her husband had died the previous year – was also remarked upon, as were the facts that she suffered from arthritis and had not been able to take a summer holiday because of the work involved. As might be expected, the press had a field day.

Gillick’s friends were delighted as the news broke that it was her work that would be filling their purses and pockets. The Chancellor of the Exchequer and the MP from her home town of Nottingham also wrote to congratulate her, as did the Suffragette Fellowship. While the press coverage was largely favourable, there were a few dissenting voices. Was the portrait too young? Did it look like the Queen? The sculptor Jacob Epstein opined loftily that ‘It might be … any pretty girl’. The Royal Mint also experienced difficulties, for Gillick was not used to providing the degree of crispness that it considered necessary for its coins.

Generally, though, the portrait was welcomed and the more knowledgeable among those called upon to comment were quick to spot that its success lay to a large degree in an unlikely source: the Renaissance medals of the fifteenthcentury Italian painter Pisanello and the artists who followed him. In a talk on the BBC’s Third programme the art historian Charles Mitchell observed: ‘The new royal portrait is by no means an imitation of any one or other of Pisanello’s medals; but its formal kinship … is unmistakable. It breathes the air of the early Renaissance. … It was time, I think, for a leap of the imagination; and Mrs. Gillick has made it.’ The numismatist Humphrey Sutherland was in agreement, writing in an article for Country Life: ‘Mrs. Gillick’s portrait, with its simplicity, its space and its economical ornament, suggests rather the Italian grace of Renaissance design.’ How had this come about? The answer lies in the artist’s training at the Royal College of Art in London in 1902-04, when she studied under the sculptor Edouard Lanteri. Inspired by the example of Pisanello who, Lanteri wrote, had brought the medal to ‘rare perfection’, he had begun to make cast medals in the 1880s and encouraged his students to follow suit.

Gillick’s first known essays in the medium belong to the years directly before the First World War and indicate how readily she took to this particular art form. A medal of the barrister and patron of the arts Douglas Illingworth shows her equalling Lanteri in the subtlety of the modelling and far exceeding him in the elegance of the accompanying inscription. During the First World War she was called upon to make three medals commemorating airmen who had shot down German airships over Britain, a menace that the country’s defences were finding it hard to counter. Each of the three medals bears a portrait of a young airman and shares a common reverse symbolising the protection they offered. This reverse shows that she was as skilled at symbolic compositions as at portraits. The spareness of the design, with just a plane above and the London skyline with St Paul’s below and, between them, a massive cloud concealing the danger, was revolutionary for British medals of the time, which until now had failed completely to match the inventiveness and expressiveness of their German equivalents.

Other cast medals followed in the interwar years, but more lucrative were the struck medals commissioned by a range of institutions, including learned societies and professional bodies, which also generally required a portrait for the obverse and a symbolic reverse. An early struck medal, dating to 1917, commemorates the centenary of the death of the Polish national hero Tadeusz Kościuszko. Commissioned by an organisation campaigning for Polish independence, the medal was a joint production, with Mary Gillick signing the portrait on the obverse and her husband Ernest doing likewise for the Polish eagle readying itself for flight on the reverse. It is interesting, however, that the arrangement of the inscriptions and the forms of the letters on both sides would seem to be by Mary, raising the question as to how much of her work lies unrecognised in pieces publicly proclaimed as her husband’s – a question that is addressed in the book. It seems that Mary always regarded Ernest’s career as more important than her own, and, as was generally the case, household duties fell to her, meaning that she had less time for her own work. But to what degree she actually worked on his sculptures, helping him to fulfil his various commissions, remains an open question.

Although medals such as the Kościuszko commemorative were to be manufactured using a very different technique, Gillick remained faithful to the principles of Italian Renaissance cast medal design, as can be seen in the balance between imagery and inscription, the forms of the portraits and the compositions of the reverses. At the same time, she imbued her works with a pared down and thoroughly modernist aesthetic. A medal of the engineer John Cadman commissioned by the Institute of Petroleum offers an example. On the obverse the large letters of the inscription provide a solid frame for the portrait, whilst on the reverse the combination of horizontal and edge inscriptions is a device learned from Pisanello. At the same time, the artist avoids unnecessary perspective, depicting the centrally placed female figure parallel with the surface of the medal and thereby respecting its integrity as an object; the figure’s verticality offsets the horizontal inscription. The controlled nature of this composition, in which structure and balance are the key elements, is very much in tune with contemporary thinking regarding design. The Latin inscription translates as ‘Through the light of genius for the increase of knowledge’, with the placing of the lamp within the word LVMEN (Light) adding a witty touch. It was commissions such as this that prepared Gillick for her successful entry in the competition for the coinage in 1952. Her portrait of the Queen was used not just in the UK but also for the coins of Canada, Australia, New Zealand, South Africa, Southern Rhodesia and Ceylon.

She also made a medallic version in higher relief for use on official medals, and was the chosen artist for the medal for the 1953-54 royal tour of the Commonwealth with its conjoined portraits of the Queen and Prince Philip. A portrait of the prince for use on medals issued by the various organisations with which he was associated soon followed. 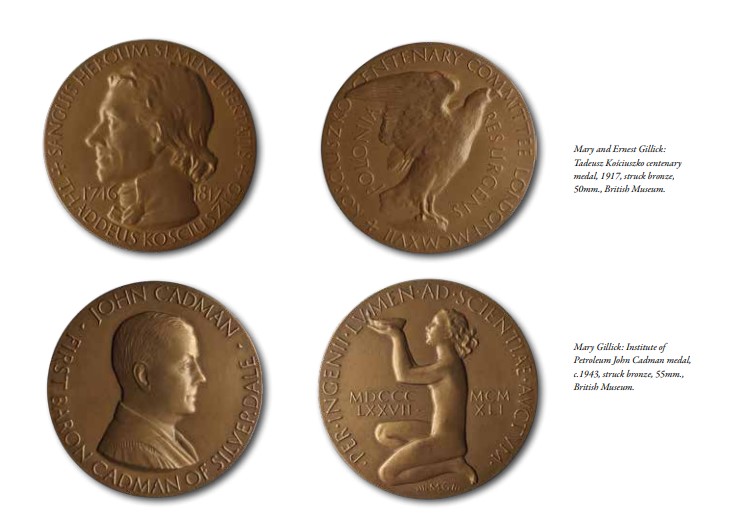 These official commissions and the celebrity that came with them gave a sudden boost to Gillick’s career. Already resolved to complete her late husband’s unfinished works and despite not being in the best health, she began to take on orders for larger memorials. She had made large portrait medallions for interior settings throughout her earlier career, but her newfound fame gave rise to many more works of this type, for ecclesiastical settings, including Canterbury and Chichester Cathedrals as well as parish churches, and secular spaces such as the Royal Society of Medicine’s headquarters and University College Hospital, where her memorial to the singer Kathleen Ferrier was unveiled in 1958. Another commission that was a direct result of the coin portrait was for a relief portrait of Winston Churchill to be stamped on to the covers of the six-volume edition of the statesman’s monumental The Second World War published by the Educational Book Company in 1954.

Although the coin portrait was superseded by portraits of the Queen by other artists from the time of decimalisation on, Gillick’s design remained in circulation in the UK into the 1990s. It is still used on Maundy coins and the silhouette based on Gillick’s head appears on British stamps to this day. Revolutionary when it was first introduced, it has become a classic piece of design. This being the case, the current celebrations of the life of one very dedicated woman, the woman who has been Queen for the last seventy years, give us an opportunity to remember another woman, the artist Mary Gillick, who seventy years ago devised an iconic portrait that combined an awareness and deep respect for the earliest – and often considered the best – medals of the past with an understanding of what was required for the twentieth century, for a modern Britain with a forward-looking Queen. 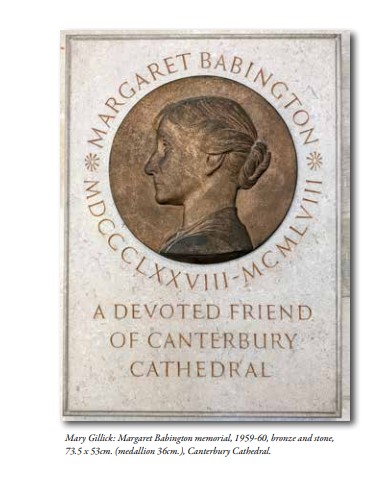 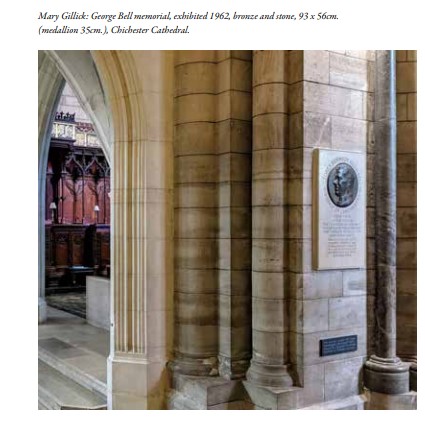