PASSPORTS TO GEORGIAN LIFE: TOKENS AT THE FOUNDLING MUSEUM

In 1739, Thomas Coram established the Foundling Hospital to care for babies at risk of abandonment. Today, the Foundling Museum continues his legacy, inspiring social change through art.

For visitors to the museum, it’s often the smallest, humblest objects in the Collection that make the deepest impact. Between the 1740s and 1760s, mothers leaving their babies at the Foundling Hospital would also leave a small item as a means of identification. These ranged from a pot of rouge to solid gold jewellery. There are 391 tokens in the Foundling Museum collection, with many thousands more paper and textile ones in the in the Archives, giving us extraordinary glimpses into eighteenth-century society and individual lives.

This year, the Foundling Museum will be telling their stories in new ways. The tokens will become passports to Georgian life – from high society to precarious survival – in a new digital project launching this summer. When a mother left a token with her child, it would be folded up inside the completed admissions paper, or ‘billet’. This would never be opened unless a parent returned to claim their child. But in the nineteenth century, Governors of the Hospital decided to put some of the tokens on display. No one thought to make a note of which token belonged to which child.

Thanks to painstaking research, we can now reconnect some tokens to individuals. These ‘reunited’ tokens tell us stories of parents forced to give up their baby, and the future life of their child. Research is ongoing but it’s likely that we will never unlock the stories behind all of the tokens. Insights into the tokens shared here draw on the work of many researchers, notably Janette Bright, Gillian Clark and John Styles.

Here are the stories of a handful of tokens. Visit https://foundlingmuseum.org.uk/tokens for more.  If you have any additional information about the tokens or about individuals who have been traced from the Hospital’s eighteenth-century records, we would love to hear from you.

Please get in touch at [email protected] 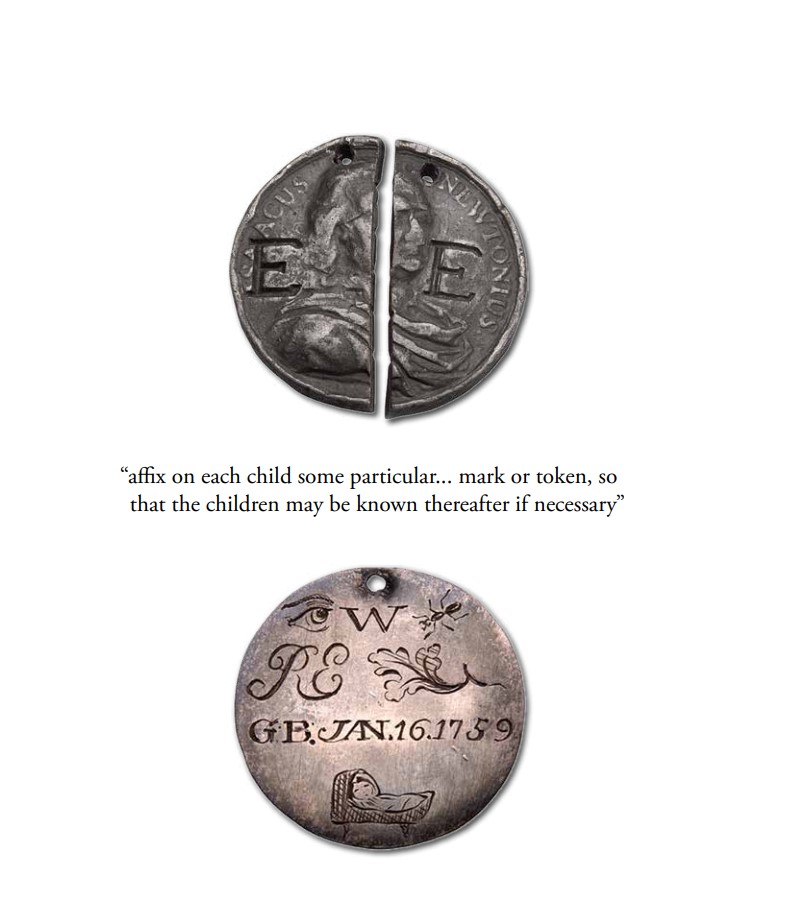 This medal has been cut in half, with both pieces inscribed with the letter E. This might relate to the child’s or the mother’s name. So far, we’ve been unable to match this token with the child it was left with. It’s mysterious that both halves are in the Collection. We might expect the parent to have kept one half in the hope of an eventual reunion. The fact that we have both suggests that the child may have been reclaimed. Alternatively, the halves could have been love tokens belonging to the parents, brought together to form a single token. Each half has been punched with a hole so it could hang from a thread and be worn. The symbolism of divided halves is still used in jewellery expressing love and friendship today.

The medal commemorates scientist and mathematician Sir Isaac Newton (1642–1727). One of the most influential scientists of all time, he developed important theories of gravity, light and colour, and the speed of sound. Newton’s face is on the front of the medal and the back depicts his tomb in Westminster Abbey. Made from tin, it would have been fairly easy to cut the medal in half. Five drill marks down the centre cut edge show where the split has been started. The medal is a copy of a copper version, designed in Switzerland by Jean Dassier, chief engraver of the Geneva mint. The fact that cheap copies were made of this commemorative object reflects the growing public interest in science during the eighteenth century.

This medal is a pass to the Vauxhall Gardens – an entertainment venue that was like a theme park, art gallery, fashion show and night club combined. Paying visitors could listen to music, watch fireworks, dance, people-watch, eat and drink among exquisite formal gardens and elaborate pavilions. The eighteenth century saw a huge expansion of paid-for leisure activities, available to a widening range of society. Vauxhall Gardens was a prime example.

A season ticket for pleasure

As a season pass, this medal allowed repeated entrance to the fashionable Vauxhall Gardens. One off entry cost a shilling, a substantial amount for most Londoners. This was a deliberate way of keeping the venue ‘respectable’, ensuring only relatively affluent people could afford to visit. Despite the high entry fee, 100,000 people visited annually. The pass was redesigned every year to prevent forgeries. The artist William Hogarth designed this one. It shows the Greek poet Arion riding a dolphin. Hogarth was also a keen supporter of the Hospital, donating his portrait of its founder, Thomas Coram, to the charity.

A name, but not the child’s

This token has not yet been matched to a child. The reverse of the pass is inscribed with the number 184 and the name ‘Richd Arnold Esq’. This is original owner of the pass, and we don’t know of any connection between him and the child left at the Hospital. An expired season pass might well have been lost, discarded or given away.

Purchased for the Foundling Museum by William and Helena Korner,  2005

You have my heart

This heart-shaped token is inscribed with a short, poignant poem: You have my Heart Though wee must Part. Below are the letters I and W, perhaps the child’s initials, or those of their parents. Finally, ‘Nat.’ (short for ‘born’ in Latin) and the birthdate, 6 September 1759. For now, we are left to imagine the backstory of this token, as we have not yet been able to match it to the record of a child. 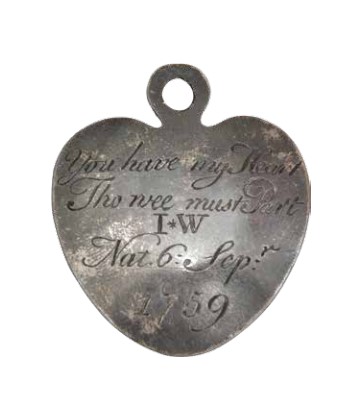 This is one of several objects in the Collection made specifically as tokens, as opposed to repurposed possessions. The tokens parents left with their children at the Hospital were not gifts, keepsakes or love tokens. They had a practical purpose: proving the relationship and identifying the child if a parent came back to reclaim them.

But parents sometimes chose or made tokens to express their feelings of loss, love or hope, such as this one. Children brought up in the care of the Hospital never saw their tokens. The objects were part of each child’s official documentation, kept in the Hospital archives. Each object was wrapped inside the child’s paper record or ‘billet’, sealed, and filed by date of admission. These packets were only to be opened if a parent returned for their child.

A puzzle This silver disk is inscribed with a puzzle known as a rebus. Images stand in for words or parts of words. An eye for ‘I’, W with the image of a little insect for ‘want’ and RE before a leaf for ‘relief’, together giving the desperate message ‘I want relief’. Below are the initials G.B. and the date, Jan.16.1759. At the bottom is a tiny engraving of a baby in a crib.

Word games and riddles were popular in the eighteenth century. They were compiled in books such as The Puzzle; being a choice collection of Conundrums (1745) or Youthful Amusements in Verse (1757). But as these titles suggest, word games were usually lighthearted entertainments, unlike the poignant message on this token.

The name ‘rebus’ for this type of puzzle probably comes from the Latin expression ‘non verbis, sed rebus’, meaning ‘not with words, but with things’. This phase seems appropriate for many of the tokens in the Collection which communicate heartfelt messages through objects.

This disc is a pass to travel on the ‘King’s private road’. Throughout the eighteenth century,
British monarchs had their own road connecting two royal palaces some eleven miles apart. It stretched from St James’s Palace in Westminster to Hampton Court. Charles II was the first to claim exclusive use of the route, and it remained private for over a century until 1830. But from 1722, tickets like this one were issued to allow access under special circumstances. The first owner of this pass might have been a government messenger, or a tenant living somewhere along the route.

Because the passes were often forged, the design had to be changed four times. This one, made in
1737, is the third version. The initials TR set in the middle of the 1737 date are those of Thomas
Ripley, Keeper of the King’s Roads and Conductor of Royal Progresses. There were about 1,500
passes of this design. This one is numbered 946.

This pass was left in 1756 with a child called Nathaniel Lane, renamed Mark Fowler by the Hospital. He was one of around 500 children whosefamilies later returned for them. In 1764 Markwas claimed by a man sharing his birth name of Nathaniel Lane. We don’t know for sure if hewas the father. In the child’s record, he is called a “friend of mother”. Sadly the adult Nathaniel was too late. The child had died a few weeks after he arrived at the Hospital.

Many parents used coins as tokens, sometimes with a hole so that the coin could be threaded onto ribbon and worn. Often they added extra holes to make it more individual. Jane Crispin, the mother who punched the five holes into this silver coin, successfully transformed it into a unique token – it is the only one like it in the Collection.

The child left with this token in 1756 was originally called Ann Williams. Her mother, Jane Crispin, an unmarried woman living in Soho, returned for her two years later. Ann, now renamed Lucy Draper by the Hospital, was alive and being looked after by a wet nurse in Kent. Jane’s detailed description of the token on her claim paperwork as “a piece of silver the size of a sixpence piece with five holes in the same” has helped researchers match up this coin with the child’s record.

Before 1764, if you returned to reclaim your child, you had to promise to pay the Hospital’s costs in caring for them. Only once you had committed to paying would you be told if your child was alive or dead. Even if a child had died, the person making the claim would be expected to pay costs up until the date of death. Claimants needed someone to vouch that they were able to pay. For Jane Crispin these were Thomas Gibson, coronet in General Hawley’s Regiment of Dragoons, and Charles Hagan, maker of boned bodices (called ‘stays’), of Dean Street, Soho. The rule was changed in 1764. From then on, so that as long as a petitioner could prove who they were and that they were able to care for a child, the infant was returned free of charge.