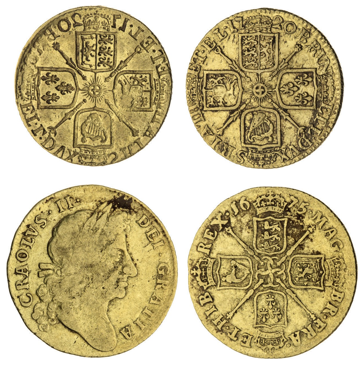 Like many of us, you may have found the last two years an unexpectedly convenient time to finish off those long overdue household renovations. A new carpet here, a lick of paint there. Perhaps you even had time to complete that long-aspired to extension. However none of us could realistically expect to find so much as a thumb-tac if we had decided to relay the kitchen flooring.

Imagine the surprise then, when one fortuitous household stumbled across a salt-glazed earthenware cup nestled just beneath their concrete, glistening to the brim with English gold

Discovered in an undisclosed location in the Ellerby area of North Yorkshire, this scarcely imaginable dream became very real indeed. The trove, consisting of over 260 gold coins were found in situ, 6-8 inches (15-20cm) beneath hardcore flooring, and date from the reign of James I through to the dying days of George I. Almost to a coin, each specimen represents the ‘pound piece’ of its day. Most unusually, the hoard also contained a contemporary 1721 4,000- Reis struck during the reign of Jõaõ V of Portugal. At the time this coin was permissible in England under the corrupted sobriquet – ‘moidore’ and good for 27-Shillings. The contextualised discovery of such a coin is exceedingly rare for England, with only the Merton College Chapel trove of 1903 presenting a comparable profile. More widely however single site finds of moidores are more common place, as too are the contemporary coin weights used to facilitate their trade. Unsurprisingly however this coin is scheduled for future accession into a public collection given its almost unprecedented context. Fortuitously the remaining coins have been officially disclaimed, and Spink is now honoured to have been selected to handle this prestigious sale as part of its traditional Coinex offering on Friday 7th October.

It is exceedingly rare for discoveries of this magnitude to ever enter the market place, almost as rare as hoards of the first quarter of the 18th Century to be discovered in the first place. One may consider the threat of the Jacobites a possible cause for its deposition. However, the impromptu manner, the location and terminus post quem of the hoard being no earlier than 25th March 1727 renders this hypothesis rather unlikely. Contrastingly, and as a largely contributory factor to the hoard being disclaimed under both the 1996 Treasure Act and the earlier Treasure Trove legislation, is the conclusive identity of the coins’ original owners – the Fernley-Maisters. The Maisters were perhaps the most influential mercantile family in Hull from the late 16th to 18th centuries, trading as importers and exporters of iron ore, timber and coal from the Baltic; several latter generations served as Whig politicians and Members of Parliament in the early 1700s. 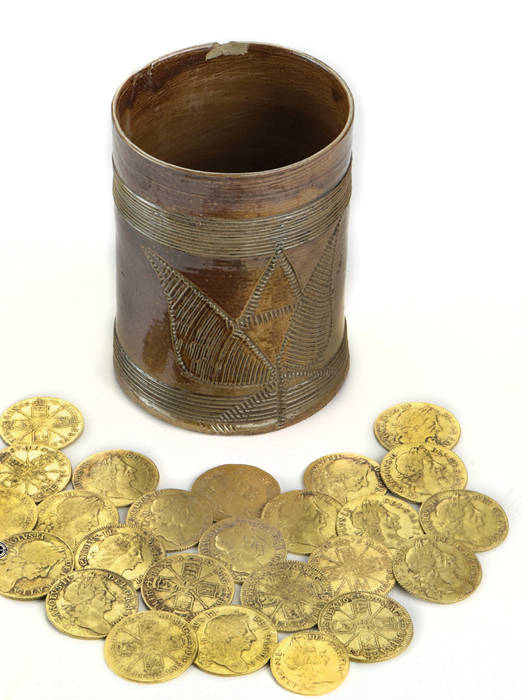 Upon the death of his first wife in 1694, Joseph Fernley would remarry Sarah, daughter of Alderman Henry Maister. Their marriage would last three decades and bear five children, of whom sadly only two would outlive Joseph. It would appear that Joseph had interests not just in the Master family business but also in varied real estate. An advertisement in the London Gazette of July 1725 states: ‘To be sold at Kingston Upon Hull, two Rape mills standing in one Yard, one for Wind, the other for Horses with many conveniences. Inquire of Mr Joseph Fernley there.’ Joseph would pass away the following September, aged 76. Despite his pre-nuptial agreement preventing any personal benefit from the estate passing to the Fernley family, his widow ensured his burial alongside the Maisters in the Great Isle of the Chancel at Holy Trinity Church in Kingston- upon-Hull. Sarah would remain in Ellerby for the rest of her life until her own death at the age of 80 in August 1745. After this time the family estates passed through non-direct channels to nephews and nieces until the line died out. It is evident these coins were amassed during the lifetime of Joseph and Sarah, with their fixation on pound pieces and few if any fractional issues both intriguing and perplexing. The general condition of the coins pointing towards heavy circulation. The presence of pre-1649 hammered gold in large quantities perhaps pointing to a significant distrust of the fledgling Hanoverians, the Guinea coinage itself, or simply the low supply of the new coinage in North Yorkshire at the time. Fascinating is the number of full flan, light issue coins, both in the Unites and Laurels but also amongst the Guineas – incongruous survivors that would undoubtedly have been phased out by the recall of further gold in the 1730s and 1770s had they not be cached prior to this time. Many more revelations will ultimately appear in the final catalogue, but the opportunity to study, share and ultimately sell this remarkable trove will not only present a once-in-a-generation opportunity to buy an English gold hoard coin, but further shed light on the study and circulation of a wide variety of gold within England during the Hanoverian period.

With a face value of the trove at over £262.0.0, this fascinating and highly important discovery is also one of the largest yet recorded from England. The sale, like many of recent years at Spink, will undoubtedly become a bellwether of the value and rarity of Laurels, Unites and Guineas for many years to come.

For further information about this exceptional opportunity, please do not hesitate to contact Gregory Edmund, [email protected] spink.com, or the Coin Department.