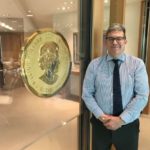 Should we still collect them?

Few coin collectors will have failed to notice the television coverage of Edward Colston’s Bristol statue
being toppled off its plinth by anti-racism protestors. Colston’s crime was his prolonged involvement with
the Royal African Company and its slave trafficking business. Three hundred years on the protestors were
not in a forgiving mood and, surrounded by cheering crowds, his statue was hurled unceremoniously into the harbour. The dramatic dumping of the Colston statue – though a trivial event in itself – sparked off a reappraisal of other statues as well as blue plaques and miscellaneous memorabilia surrounding the key figures once active in the slave trade. Could this wind of change eventually blow through the numismatic market where collectors currently seem to have few qualms about snapping up coins associated with companies such as the Royal African Company or the South Sea Company – both notorious slave trading businesses?

Might protestors one day be picketing the auction rooms at Spink?

I believe that, for the moment at least, coin collectors are probably in the clear. While all coin collectors
will doubtless deplore the inhumanity of slavery, it is not so obvious that a case can be built which proves
that the coins themselves embody this evil. Despite the origins of the metal used in their manufacture –
they were struck not by the slave traders but by the Royal Mint for public use in general circulation.

Coins associated with the Royal African Company are the ones that could potentially be most singled out for attack. Coins from five guinea pieces down to shillings were struck with gold and silver supplied to
the Royal Mint by the Royal African Company. The coins were issued over a 63 year period from 1663 onwards and owing to their west African origin (Guinea) they were specially marked under the King’s bust with either an “Elephant” or an “Elephant and Castle” – making them very distinctive and historic. At the time they were struck it was the elephants on the gold coins which charmed the public and it was the “crowd” who colloquially named them “guineas” – the Royal Mint didn’t use the term until well into the eighteenth century.

A defence that coin collectors might invoke is that the gold didn’t actually arise from slave trading. When we break down the activities of the Royal African Company, we can see that it was really three businesses – not one. Known today as the “Bloody Triangle” business model, the Royal African Company had three very distinct profit sources;
• Trading British sourced manufactured goods with African countries in west Africa.
• Trafficking slaves from west Africa to the Americas
• Trading tropical goods from the Americas back to Britain.

The gold for the “Elephant” or “Elephant & Castle” guineas came entirely from the first leg of the triangle.
This involved the import of British goods and conventional bilateral trade between the Company and the
African people. The Africans mined the gold dust and then used it as currency to acquire goods from the
Royal African Company otherwise not easily obtainable locally. Its perhaps important to remember that
the African people had not at that point been colonised – the various countries of seventeenth century
west Africa held sovereignty over their territories and the forts built mostly by the English and the Dutch
were there with permission. So, the gold dust brought back to England by the Royal African Company
and minted into guineas arose solely from free and fair trade. Leg Two of the triangle involved the slave
trafficking and while this and Leg Three may have been profitable in their own right they didn’t involve
any of the gold dust delivered to the Mint. Profits from the second and third legs would have only
crystallised once the sugar and tobacco etc from the Americas was sold in England, and the proceeds of
these transactions would have been denominated in ordinary money.

Two other British companies also arranged for coins to be minted from west African gold dust brought back from trading missions and in both cases the “innocence” of the coins is even clearer.

The first of these was the Guinea Company of Scotland which was granted a trading charter by Charles I in 1634. This ill-fated Company sent two trading ships to west Africa – the Golden Lion and the St Andrew. The Golden Lion returned safely arriving back in Leith in September 1637. The 200 troy pounds or
thereabouts of gold on board was minted in Edinburgh by Nicholas Briot and his son in law John Falconner – into “units” and “half units”. The second ship never made it home – it was seized in Sao Tome and its
crew slaughtered by the Portuguese. Neither ship attempted to conduct any slaving and the Guinea
Company of Scotland understandably  iscontinued its voyages. These coins are therefore untainted by
slavery.

The second company was the Scottish Darien Company. Best known for its disastrous attempt to establish a colony in modern day Panama, the Darien Company also sent a trade ship to Guinea – the African
Merchant. This voyage brought back 70 troy pounds of gold which was struck into “pistoles” and “half pistoles” – the last gold coins to be minted by Scotland as a sovereign nation. Minted in 1701 under William III, they were distinctively marked with a “Rising Sun” logo. Once again it would appear that this was purely a trading voyage with no slaving activity.

In 1723 huge numbers of silver coins were minted with the letters SSC in the angles of the reverse –
designating that the coins were minted with bullion supplied by the South Sea Company. This company
was originally established as a sort of public-private partnership to help restructure Government debt and it is perhaps best known for the role which it played in the financial market crash of 1720; the “South Sea Bubble”. Less well known is that it was also the holder of the “Asiento” – a contract with the Spanish Government which allowed for the right to traffic 4,800 slaves per year into Spanish South America. These slaves were procured under a contract with the Royal African Company.

So, was the silver used to mint the SSC coins a product of the slave trade? Perhaps fortuitously for coin
collectors, the answer is “no” – the silver for the SSC coins had nothing to do with slaving. The silver came from a conventional trading mission. The South Sea Company’s merchant ship the Royal George was loaded up with trade goods in 1721 and then proceeded directly to Cartagena (Colombia) where the cargo was sold at the trade fair of June 1722. The proceeds of the trade were one million pieces of eight which were then brought back to England in 1723 – and some were then re-minted into SSC coins. This was the largest silver coin minting programme of the whole eighteenth century.

The fact that the coins minted with bullion supplied by the Royal African Company, South Sea Company and perhaps the East India Company arose from conventional trading activity rather than from slave trafficking may help numismatists to overlook the dodgy underlying ethics of these companies. Probably we can go on collecting these interesting coins and continue to look on them merely as collectable historical objects. They don’t seem to be embodiments of the slave trade. But some wariness might be justified – just ask a collector of antique ivory to find out how sustained public pressure can sometimes purge a market very effectively. Much more information on the origins of metals in Britain’s coins can be found in my new book The Metal in Britain’s Coins – published by Spink in June 2020.