Rarely can a single find provoke such excitement in British numismatics. Notable occasions do however spring to mind with the discoveries of Coenwulf’s Gold Mancus in 2001 and the Edward III ‘Double-Leopard’ in 2006. Indeed, Spink has had the highest honour of bringing to auction both of these coins, and prides itself in ‘world firsts’ – what better way to celebrate than with this latest find! For metal detectorists, the pandemic will be best remembered for the discovery of several notable Anarchyperiod silver pennies and two early English gold coins. The first came in a suspected hoard of Edward III coins recovered near Reepham, Norfolk in 2020 which has furnished us with a matchless example of Edward III’s failed ‘Leopard’ coinage of 1344.

Unfortunately for private collectors, this coin will undoubtedly be declared treasure and become lodged in an institutional collection for the benefit of future study. However, it is the second chance find from Devon in September 2021 that will take global centre stage on 23rd January 2022. This newly discovered Henry III Gold Penny adds but one example to an extremely limited corpus of just eight coins, and the first addition since the accession of the Conte specimen to the Fitzwilliam Museum (Cambridge) in 2001. Notably the new discovery shares a reverse die with this new find, but one must go back 260 years before a die parallel can be found for the obverse. 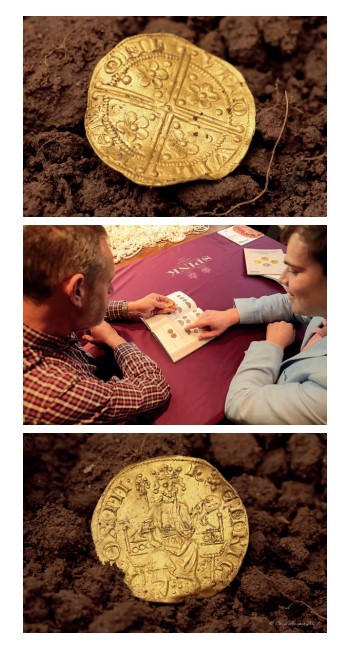 Enchantingly, this new coin cements the proposed sequence of noted antiquary Sir John Evans posited in 1900, as it provides us with a second example of Evans ‘first obverse die’ in the series of four known dies. While numismatic focus has traditionally centred on the mythical quality of this talismanic ‘emergency’ coinage of August 1257, extensive work by world-renowned Henry III specialist Professor David Carpenter of King’s College London in the years since our Norweb sale has provided fresh context to Henry’s gold specie and its raison d’être. Cataloguer Gregory Edmund is most grateful for David’s invaluable information on both the source of his bullion and the reason for striking at the onset of the Welsh Campaign against Llywelyn ap Gruffudd, first Prince of Wales.

Following a gathering of merchants in London in the November following release, and out of fear of gold being spread thinly amongst the working population, the King relented to Baronial pressure to permit the refusal of his 4-month old coinage in preference for the staple silver Penny. His goldsmith William of Gloucester’s hard work of some 52,000 coins would result in a curious 15 year spasm that ultimately settled with their recall and smelting by the early 1270s.

In short, England’s first gold coin was nothing but a damp squib. However the artistry of this now prized rarity would indicate a concerted effort on behalf of the moneyer and the King to reinforce the authority of the Royal personage, a position challenged not just by the ratification of Magna Carta, but also famously by Simon de Montfort following the Baron’s revolt in 1258, as a precursor to the Battle of Evesham in 1265.

A well-known example appeared at the Virtual NY INC of 2021 setting a new high for an English hammered gold coin at auction, and it is anticipated that with an holistic Spink catalogue and a thorough reanalysis by David, this unique one-coin auction will inspire the next generation for whom one will become the very fortunate and proud possessor.