Over a hundred years on, Europe has experienced all three again. Kathleen ‘Kitty’ Mann RRC1 saw all of these phenomena in war service between 1915 and 1919. She was awarded medals and for the Gallipoli period wrote an almost daily diary recording events with photographs, and documents. It is from that diary that I tell the circumstances of three of her medal awards: the Royal Red Cross first Class, the Serbian Order of St Sava fifth class and the French silver medal for work in the Spanish epidemic outbreak in 1919. The sections in italics are quotes from the diary.

Kathleen Mann (1872-1975), known as Kitty, served in both the Territorial Nursing Service (TNS) and the Queen Alexandra’s Imperial Military Nursing Service (QAIMNS) during the First World War. After working in a hospital in Britain, in July 1915 she was inoculated, issued with kit, appropriate uniform, and joined the hospital ship Salta which sailed to the eastern Mediterranean to nurse casualties from the Gallipoli campaign. She then transferred to nurse on two Australian troop ships, Ulysses, and Marathon. After home leave, Sister Mann was appointed Matron of the hospital ship Devanha. That ship sailed from Southampton for the Dardanelles in October 1915. Kitty’s diary described the scenes she witnessed including the evacuation of sick and wounded Allied troops from the Gallipoli peninsula beaches, the medical conditions and destinations. In the course of her service, she saw the initial stages of Aviation and submarine warfare and rescued survivors from a U-boat that had torpedoed a freighter. She also recorded the lighter side of shipborne life, sightseeing in Egypt and India when she sailed across the Indian ocean to Mumbai (Bombay) taking Indian soldiers home. In one entry Kitty describes nurses as ‘Kitchener’s Tourists’.

The hospital ships were all converted merchant ships. Wards, operating theatres, laundries, dispensaries, some x-ray rooms and ‘Padded Cells’ were set up in ships that had been cattle and other cargo carriers.

A typical medical team consisted of a doctor, male orderlies and the nurses, led by a matron. There were eleven nurses in HMHS UYLSSES (see image below). They administered and cared for soldiers who could number up to one thousand, running the routines in the wards, laundry, linen, dressings, drugs, sanitary issues, clothing and medical care. Working relationships between the ship’s captain and crew, the medical team and the patients mattered, but inevitably there were personality clashes, and different opinions stoked by alcohol had to be managed!

Ashore at Gallipoli troops lived in cramped, dirty trenches, suffering not only from the fighting but from extreme weather conditions and a lack of water and food. Illness from dysentery and disease was widespread. Medical facilities were initially badly organised and overwhelmed by the numbers of sick and wounded, although the situation did gradually improve.

The Hospital ships operated a 4-to-5-day shuttle service to Mediterranean ports, frequently coming under fire, and were also at risk from submarine attack and mines. On embarkation casualties were triaged and allocated to wards. With deaths and burials this was hard but rewarding work, even for trained nurses. First stop were the islands of Murdos or Lemnos, where patients were reallocated, going on to the destination ports of Malta and Alexandria. Post- disembarkation came the task of finding and procuring replacement stores, competing with all the other ships.

There was time for recreation, and on days when the ships were empty returning, with no amusement such as television, they organised plays, ‘racing’ days, pantomime, singing and played sports on the upper decks with teams drawn from all groups in the ship. The sisters earned respect for their friendly and professional character. In harbour there were trips ashore for sightseeing, picnics, shopping and teas, and even a trip to the Pyramids in Cairo.

In January 1916 HMHS DEVANAH was ordered to evacuate Serbians from Albanian beaches, taking them to Bizerte in Tunisia. In Kitty’s diary she describes her impression and emotions at the poor condition of the Serbians who had been driven over the mountains by the Austro-Hungarian Army:

20-28 January: Shocked to learn that we were ordered to take onboard Serbian refugees or perhaps the Scottish Red Cross units which we brought out from England from Albanian beaches. We wondered about the clothing for our refugees as we have no extra clothing stores from Malta.

But what we are in for we do not know. We heard that there was cholera about. The Serbian troops have retired rapidly over the mountains, instead of retreating slowly and holding the heights covering as much as ten miles a day, it being too rapid for the Austrians to follow. It also wore out the boys so that on reaching the high snow-covered mountains they went back and gave themselves up, and all now working on the land again.

About eighteen miles over the mountains there are hundreds of starving men, there being no means of reaching them over the mountains. It seems very horrible when we have so much and to spare. Many more Serbs have arrived on the beaches and being taken off on transports and hospital ships.

Sailed into Medua Bay that Italian forces have secured. It looked an uninhabited spot. Save for a few old buildings on the shore it is all mountains. The Austrians are fifteen miles off and expected this evening. The only sign of life are a few straggling soldiers making their way along the beach. Orderlies gone to their wards. The sun is warm, but out of it bitterly cold.

Embarked about 1,000 on board. The men are an appalling sight. Absolutely black with dirt and only skin and bone. Their clothes are just hanging in rags and SO dirty. As each boat came along side, we could smell the men before they came on board. I would not have believed it possible that men could live under such conditions. All their clothing has been thrown overboard. It is more than alive. What a gruesome picture it is. Such a hopeless, helpless, sad mass of people. I shall never forget it, the horror attached to it all. We also have about twenty-seven women and children. Some are officer’s wives with their families. A pitiable sight, some of the women clothed in messy garb and miserable little children. On the beach were some bodies of the men who had just dropped on the sand and could go no further. They remained there for the tide I suppose. But the worst side must have been the numbers of miserable men left for whom we had no more room, having then more than we had space for. They clamoured to come off, but our Medical Officer could allow no more. Our departure was accompanied by six shots from either a ship or shore. One passed directly over the stern of the ship. Many of the men will die tonight.

Our Padre clad in an overall bathed fifty patients and his description of the performance was quite funny. Armed with a scrubbing brush and large slab of soap all who came his way were scrubbed and making very little improvement on some, but on others good results. He is just splendid.

Into the Ionian Sea that was very rough, we had to slow down and so rolled horribly.

The neglected condition of the men is terrible. Six died last night and the smell on the troop deck is enough to make anyone ill.

Horrible discovery on going round. Found that two sets of the latrines were blocked. These people will throw down shirts and clothing and empty meat tins, blocking the whole thing and causing the latrines to overflow black into corridors and wards. One cannot stop them so have guards on.

These gaunt specimens of humanity seem to have lost all powers of thought and look so terrible. Their habits are so awful.

Have had several more deaths, but overall, the men are cleaner, and we are more used to their horrible appearance.

At 12.30 a message received that we were to go to Bizerte on the African coast and there leave these men. The French will have a camp for them. Have supervised some more of the bathing which has been done by some Serbian Orderlies and the men are now arrayed in bright coloured pyjamas (very thin cotton ones) left over from the summer stock. Poor things, they look cold but are certainly cleaner. Have cut up some flannel coats and shaped some children’s frocks which the women are sewing. We cannot clothe this herd of people.

Reached Bizerte, Tunis, the town reminds me of a French seaside place, with nice buildings and palms growing by the roadside. It looks fertile with plenty of green about. Most refreshing to see some green fields again. More patients have died. They have not expected us so must wait for further orders. Most of the staff are off duty for the afternoon. They need to get away from the wards a bit. Many patients on the decks but alas their only covering is a shirt and a blanket over their shoulders. They must be cold, but we have no more clothing. All has been issued and they are quite keen to have some clean things. They are not quite so ravenous but some still hungry. All hollowed eyed. I wonder if they will ever make men again. There are some very old men amongst them.

At the harbour entrance disembarked the civilians and convalescents then docked to unload the rest. What a scene below stairs. The Sisters trying to grapple with the few cardigans, boots, and socks they have. It seems almost like a marketplace. It poured with rain. Some men walked off, down the gangway in a cotton shirt, a pair of socks and blanket. Others had pyjamas; some could hardly drag along but still they managed. How terrible it looked seeing that unclothed lot go off as they did but we were helpless. Homeless beings with nothing left to them and not knowing if their own people were alive or dead …

In October, at the end of the campaign five thousand nurses boarded HMHS BRITANNIC for passage to England and leave. 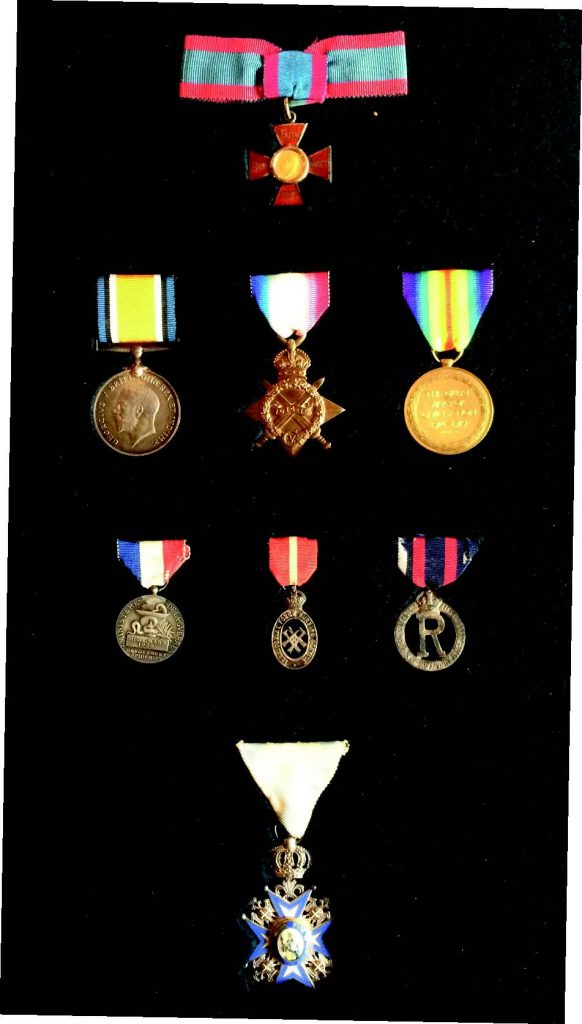 On 5th February 1917, Kitty was summoned to an investiture of the Royal Red Cross 1st class by King Edward VI, after which she took tea with Queen Alexandria on a snowy day when she shivered dressed only in her summer uniform.

Following an appendix operation and time as a District nurse in Peterborough she re-enlisted and was posted to France. While serving on the Western Front she was at the siege of Arras, at military hospitals including Etaples, and nursed victims of the subsequent Spanish Flu pandemic that merited the award of the French Influenza silver medal 1918-19.

On 18th July 1919 Kitty returned to Folkstone and was discharged from the Army. Seven months later she married John Chalk Barrett on St Valentine’s day. She was a brave, formidable woman who in her nursing career and afterwards worked energetically for her beliefs, and had little time for ‘slackers’. A strict Christian, loving to her family husband, daughters and grandchildren – of whom I was one – I feel extremely fortunate to have known her.