The invasion of Malaya started on the night of 7th/8th December 1941, with the Japanese landing at Kota Bharu, Kelantan, and was completed with the surrender of Singapore on 15th  February 1942.
Malacca was part of the Straits Settlements, which also included Penang and Singapore. The Post Office there re-opened on 21st April 1942 with the stamps being put on sale on 23rd April.

A stock of these stamps, totalling $1,500, were found, and using the State Secretary Mr Shiramoto’s handstamp and some Japanese red ink pads, overprinting began. Before all the stamps could be handstamped the Japanese red ink pads began to run dry.  At this point, it was thought that black ink pads might have to be used, when it was remembered that they had some British red ink (vermilion), and this was bought into use. During May 1942 these stamps were replaced by the overprinted issues with the single frame chop intended for use throughout Malaya.

The Dato Professor Cheah Jin Seng Collection of Japanese Occupation South East Asia will be offered for sale at the RPSL London on 24th January 2023. 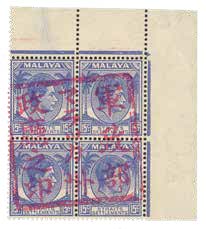 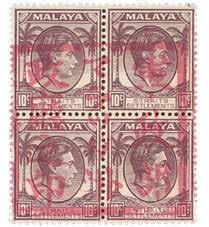 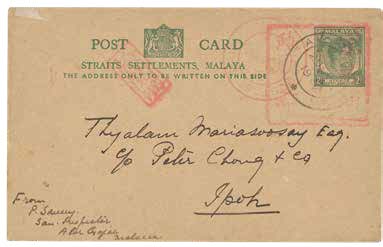 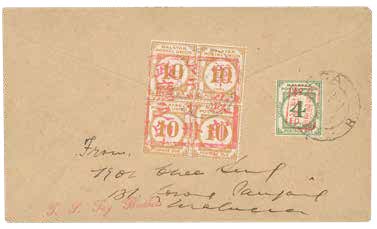