One of the joys of collecting stamps is the opportunity it provides of discovering something that was not previously known to the philatelic world. This is especially true when it comes to Indian States where major discoveries have been made, in some cases several decades after the stamps were first issued. Bahawalpur is one such Indian Princely State whose philatelic history is quite interesting and intriguing. A Princely state
(also called a Native state or Indian Feudatory state) was a nominally sovereign entity of the British Indian Empire that was not directly governed by the British, but rather by an Indian ruler under a form of indirect rule, subject to a subsidiary alliance and the suzerainty or paramountcy of the British crown.

When British rule ended in 1947 and British India was partitioned into the dominions of India and Pakistan, Indian Princely States were given the option of becoming independent or joining either of the two Dominions. Bahawalpur opted to remain independent until 5th October 1947 when it acceded to Pakistan.
Although Bahawalpur started issuing postage stamps from 1st January 1945, the philatelic world, for the most part, was unaware of the fact that stamps were issued by Bahawalpur when it was a sovereign nation (between 14th August 1947 and 3rd October 1947). These stamps are among some of the greatest rarities from the King George VI period; in most instances less than ten copies of each exist and in some cases as few as one or two.

Like the rest of Pakistan, the Princely State of Bahawalpur also had recourse to handoverprinting
the stamps of India. The area was getting its independence from the British and it was logical to see people wanting to assert their newfound status. Anticipating that the machineoverprinted stamps, to be supplied by Nasik (India), would not be available until after 15th August 1947, Bahawalpur decided to convert
their remaining stock of British India stamps and postal stationery within the various treasuries
and postal departments in Bahawalpur by handstamping them using a rubber die that was provided by Messrs De La Rue. The overprint reads “The God given Kingdom of Bahawalpur”.

A document dated 7th June 1947 from the Musheer Tasrefaat (Minister of Household) to His Highness the Nawab requesting approval of the Provisional hand stamps, with two proof impressions of the hand stamp, read “Provisional handstamps submitted for approval, their usage to be a temporary measure prior to the arrival of the overprinted issue on order.”
‘Sanction Order’ handwritten and signed by the Nawab allowing the use of the handstamp reads: “Sanction is accorded to the use of these handstamps on all denominations available in the Treasury of both Official and Ordinary postage stamps, irrespective of the quantities available”.
It was customary to publish such Government orders for the knowledge and benefit of the general public, as well as to give it official validity in the official gazette. Figure 9 shows the contents of Extraordinary Gazette No 136. It translates to: Proofs were submitted to His Highness the Nawab of Bahawalpur for approval. Strips of
three, four or five stamps were affixed on crested stationery dated 12th or 13th August 1947. These stamps were numbered and each handstamped in either green, purple, black, red or violet, with text and signature on reverse confirming approval received in the form of checkmarks in blue ink (almost certainly by the Nawab himself ) next to each stamp. 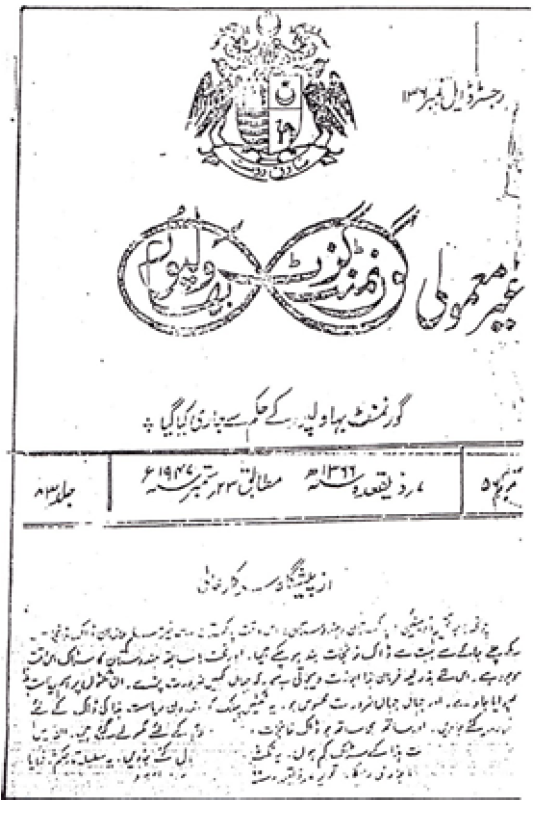 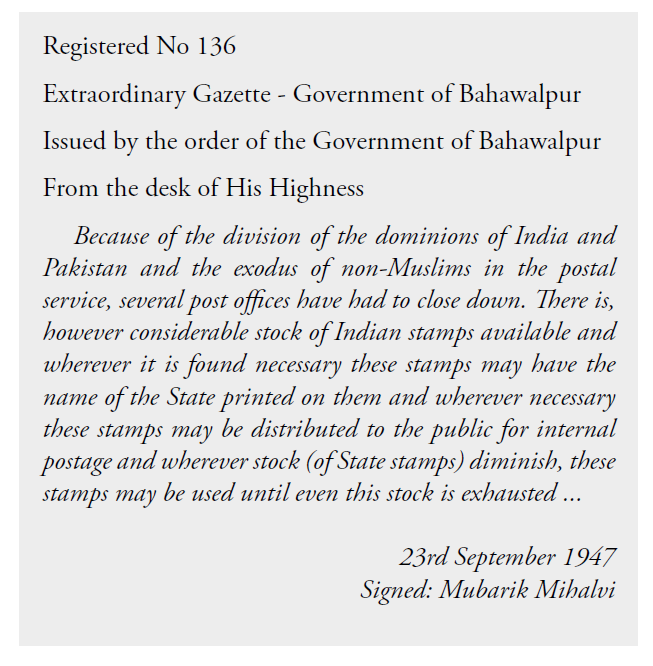 Unlike the ‘machine’ overprinted stamps which were ordered in exact quantities, the ‘handstamp’ overprinted stamps were a result of rounding up all the existing stock of British India stamps (both ordinary and Service)
and hand stamping them using the rubber handstamp. These are by far the rarest stamps of Bahawalpur and for that matter the rarest group of stamps from the KGVI reign of the entire Commonwealth – in most cases only a handful of each were ever produced, some in quantities of as little as just two or three. Used examples are exceptionally rare, only a few denominations are known used and in most of those cases only one or two covers are known. These handstamp overprint stamps of Bahawalpur are almost always found with a certain amount of toning for the simple reason that most of the stock was locked up in the Palace for almost five decades.

“in most cases only a handful of each were ever produced, some in quantities of as little as just two or three”

Bahawalpur had a close relationship with De La Rue who had printed all their stamps leading up to India’s independence. The Nawab, who was quite involved in the partition of India and Pakistan, had placed an order with De La Rue to provide the State with metal dies which were to be used to overprint the existing stock of British India stamps by the India Security Press at Nasik. A copy of the letter that accompanied the metal
dies supplied by De La Rue is shown above. 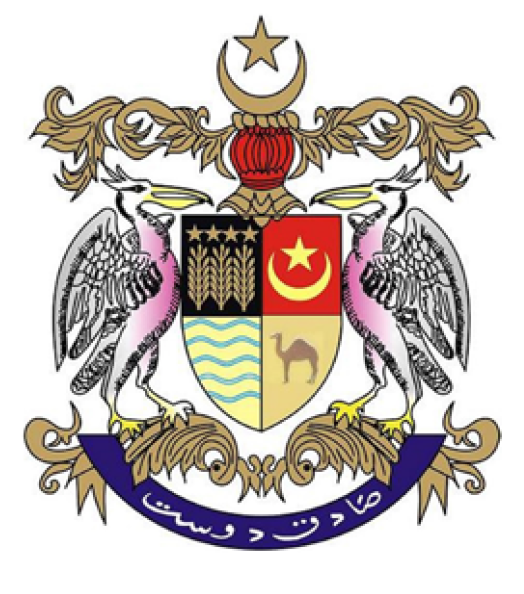 Unlike the ‘handstamp’ overprints that were applied on virtually all existing stocks of British India stamps, the machine overprinting was done on a specific set of stamps; 1r-10r from the 1937 issue and 3p-14 annas from the 1940-43 issue. 480 copies of the 3p to 1 rupee and only 60 copies each of the 2r, 5r and 10r were overprinted. These handstamp and machine overprinted stamps had postal validity for a very short period of time between their issue date – sometime after 15th August 1947 – to 3rd October 1947.
These were replaced by the Bahawalpur pictorial set that was issued in 1948. These handstamp and machine overprint stamps are listed in great detail in the new 2023 Scott Classic catalogue, pages 989-990.
Permission to reproduce this article, from a 20-page article which appeared in the London Philatelist Volume 13 No 1,500, has been granted by The Royal Philatelic Society, London and the author. The Samraat Collection of King George VI Indian States will be offered for sale at the RPSL London on 17th January 2023.