DIGGING UP THE PAST

To say events of the last two years have thrown a few curve balls in our direction is perhaps the biggest understatement since Henry VIII momentarily stopped chomp – ing on a swan long enough to declare that he wasn’t sure monogamy was for him. Fortunately for my now-wife at least, I don’t share Old Coppernose’s aversion to settling down. Nor am I particularly partial to swans for that matter; I’d rather keep both my arms unbroken, thank you very much. Thus, in amongst the many heartbreaks and hardships we’ve all faced over two tumultuous years, my better half and I have busied ourselves with what the Scandinavians call ‘nesting’ and the rest of us simply refer to as ‘growing up’, namely buying a house, getting a dog, tying the knot and then finally and most joyously of all, having a child.

Some would call ticking off so many life landmarks in such a short space of time the result of pandemic pragmatism. Others would say it’s simply down to boredom (let the record state that I’m firmly in the former camp, should my wife, son or dog be reading this). One thing that is certain though, is that having a lot of time on my hands has allowed me to focus on the things that are most important to me. Oh, and indulge in a hefty dollop of navel gazing alongside.

You see, idle hands have a habit of busying themselves in a myriad of unexpected and unwanted directions, and I soon found myself rediscovering my old, long forgotten alter-ego, ‘Collector Man’. The origin story of Collector Man is shrouded in mystery, and a large amount of concern on my parents’ part, but it is rumoured his creation was the product of a particularly firm bite from a radioactive collecting bug sometime in the late 1980s.

That’s one theory at least. Whatever the truth behind my early collecting motives, one thing I do know is that for as long as I’ve understood the concept of owning stuff, I’ve wanted it in multiple. From stamps to coins, fossils to footy stickers, I’ve had fanatical fixations with them all. There was even a brief but glorious period in 1996 when the Spice Girls Official Photocard Collection was what I wanted, what I really, really wanted. When life as a collector could be this varied and exciting, who would Wannabe anything else? 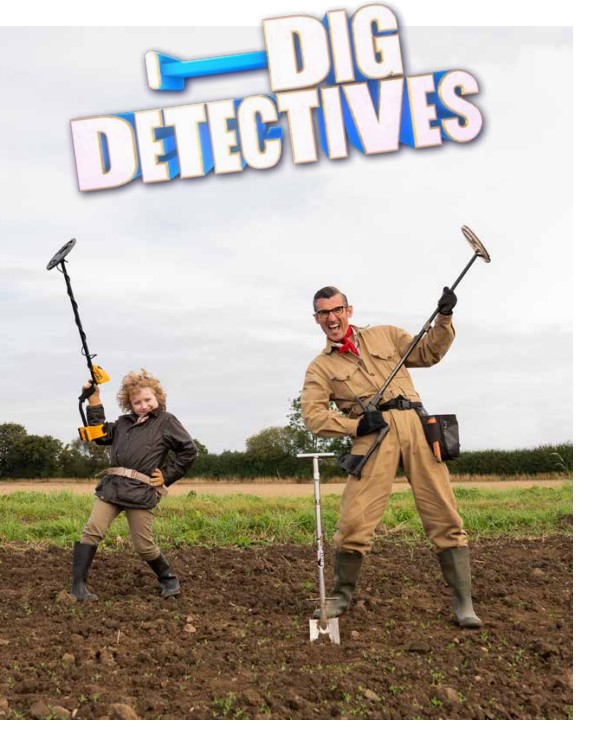 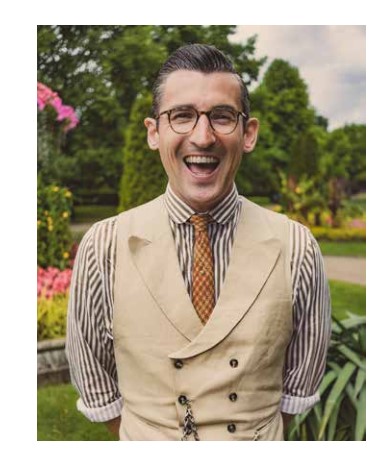 Well, every self-respecting twelve year old boy, that’s who. A textbook late bloomer desperately trying to keep up with my friends’ burgeoning interest in extra curricular pursuits, the onset of puberty saw my treasured collections, the tangible trappings of my youth, hastily relegated to a back drawer, a soon forgotten relic of my former self. Apart from that they weren’t really forgotten at all, more just temporarily overlooked. The obsessive spark that had for so long shaped me still flickered somewhere within, hidden behind the carefully curated facade of being a fully functioning, sensible adult.

And then along came a global pandemic, and with it the chance to delve into the dustiest recesses of my subconscious, and also my parent’s loft, and don the old Collector Man cape once more (sadly there is no actual Collector Man costume, but if there were it would most certainly feature a cape…and a mask to disguise any acute embarrassment that might arise when people see a grown man spending his money on tat). I had become a collector again, and all it had taken was the biggest biological threat that humanity had faced in a century. In other words, it was always meant to be.

Coins were my sole muse this time, having long been the favourite of my youthful obsessions. There’s just something about them that has always appealed to me; unlike stamps, they are designed to be handled, unlike fossils they have a tangible human connection and unlike the Spice Girls Official Photocard Collection they’re arguably more likely to stand the test of time (although I believe the card featuring Geri in her Union Jack dress at the Brits is still highly sought after). Thus auction houses were researched, Ebay was trawled and my Spidey senses were well and truly tingling.

It didn’t take many purchases, however (a couple of rather lovely Charles I hammered shillings, if you were curious), before an unwelcome sense of ennui began to creep in. I reasoned that this was almost certainly due to the absence of any chase, a key element to the collecting enthusiasm of my youth. Without the same financial constraints to operate under (there was only so far my weekly pocket money could stretch after essential sweets had been purchased), the unquenchable desire of
wanting that one special item, the anticipation of saving up for it, and then the pure adrenaline rush
when you finally made it yours had all but evaporated. In the intervening decades since he was last called to action, Collector Man’s once all conquering powers had been weakened by the kryptonite of financial stability. 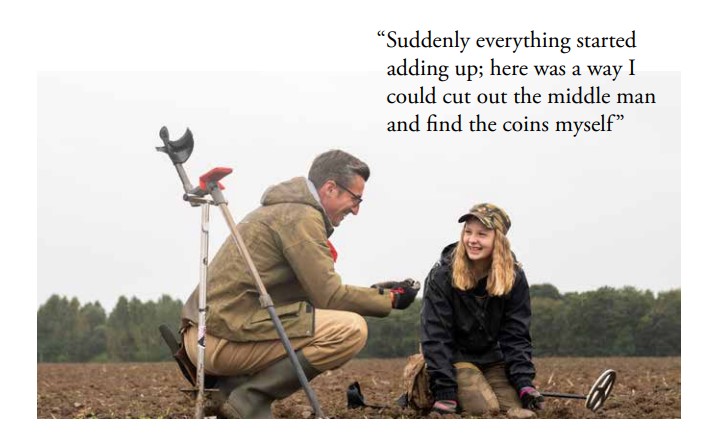 I needed something to inject the excitement back into collecting again, and just as I felt myself drifting out of the habit once more, I remembered the slightly left-field gift my dad had got me the previous Christmas: a metal detector. Of course! Suddenly everything started adding up; here was a way I could cut out the middle man and find the coins myself, whilst also giving me an excuse to get out for some much needed exercise in the process (we collectors tend to be suited to indoor habitats, the perfect conditions for ensuring nothing gets broken, not least a sweat). The signs were looking good, plus my detecting had already got off to a cracking start as I immediately detected my wife’s lack of enthusiasm for the idea. 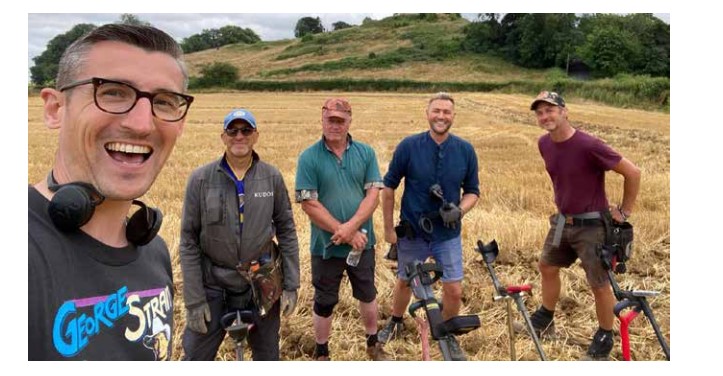 And so, armed with my trusty machine and having secured the landowner’s permission to search a local field, I was off. What happened next will probably come as little surprise to anyone who’s read this far: I got well and truly hooked. Collector Man wasn’t entirely out, but his cousin Detector Man was well and truly in (similar costume, only no steel toe capped boots this time).

It wasn’t so much what I found that reeled me in – my first trip out yielded a corroded horse shoe, my second a rusty nail – as much as the possibility of what COULD be found. The thrill of being the first person to handle an artefact that has otherwise lain undisturbed and undiscovered for hundreds, if not thousands of years, filled me with awe and wonder. Who did it belong to? Why was it left there? And just how did so many ring pulls get discarded in the middle of nowhere? 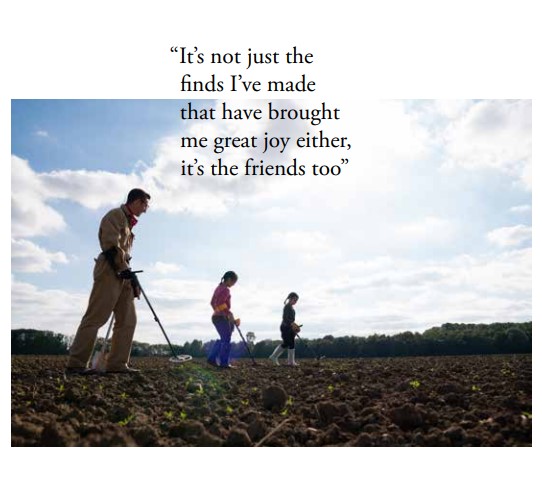 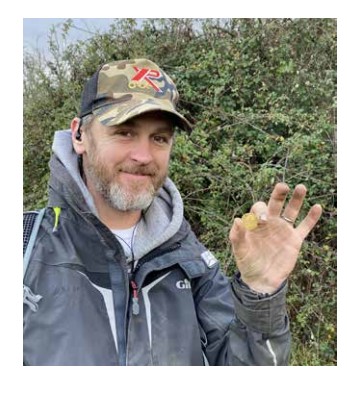 All these questions and more began percolating around my mind as soon as I began to dig, stoking my enthusiasm. And I’m not alone; the hobby has seen a surge in popularity since the pandemic, with amateur metal detectorists now accounting for the vast majority of finds in the UK – more than 96%, compared to just 0.46% from controlled archaeological investigations. Of course, most metal dectectorists can spend a lifetime searching and find little more than scrap. For every fragment of gold, there are thousands of tin cans, bottle tops and old 2ps littering the top soil, giving off misleading signals. The acceptance that one may never stumble upon treasure of any description is all part of the stoic allure of metal detecting.

Slowly but surely though, through a combination of research and perseverance, my luck began to change. I found my first hammered coin (an Edward III pre-treaty penny) a few months after I first started and haven’t looked back since (and that’s only partially due to a shoulder injury sustained by swinging the detector too vigorously). It’s not just the finds I’ve made that have brought me great joy either, it’s the friends too. I’ve fallen in with a lovely crowd of like-minded history hunters (or geeks, as my wife calls them), who share my passion for the past.

Many a weekend we can be found in unlikely spots around rural Yorkshire and beyond, hoping to find something spectacular. Very occasionally we do just that, as was the case earlier this year when my detecting buddy, Craig, called excitedly from across a field in York that he’d found gold. Gold! My heart skipped a beat. Finding gold isn’t just every detecorist’s dream, it is a deep-rooted fixation in all humans. Wars have been fought over it, fortunes built on it and quests across Middle Earth made for it.

More often than not when you think you’ve found the yellow stuff it actually turns out to be a 50 cent euro coin, or worse still a bottle cap. This time though, it was the real deal, and not just any old bit of gold either but a Queen Anne gold guinea dating to 1714 and in glorious condition. Not that we successfully identified it at the time; having practically zero experience when it comes to high end gold coinage, coupled with the excitement of the moment, we instead just stood there, mouths agape, not knowing what to say. It’s the most brilliant moment of silence I’ve ever experienced. And then we burst out laughing.

Having spent the past three hundred odd years in the ground, it’s not quite the end of the guinea’s story just yet. Owing to its collectability and in order to split its value equally with the landowner, we will have brought it to auction with Spink by the time you read this in April and we’re excited to see where it will end up next. It truly is a thing of beauty, and it’ll be a wrench to say goodbye, but if there’s one thing I’m starting to understand as a lifelong collector, it’s that the objects in our possession are only ever transient. We are merely the current custodians, the latest in a long line of owners who will have been forgotten long before the coin, or stamp, or Spice Girls Official Photocard is. And that’s how it should be.

There is also a postscript to my own story: with my day job as a TV presenter and an inherent desire to turn my hobbies into work, I’ve recently had the enormous pleasure to host a new metal detecting show for kids called Dig Detectives. We had a blast filming with ten young mud monsters at the end of last year, and it’s turned into a programme I hope will inspire the next generation of history hunters. You can discover all episodes on Sky Kids from March, so what are you waiting for? Dig in! 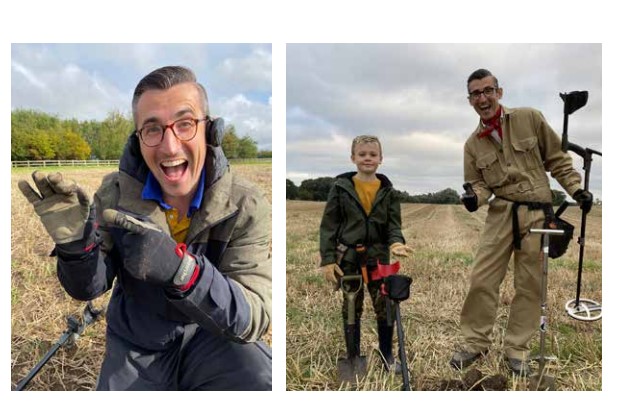