From Devon to the Islamic World: the Crusader link

Stories about the fantastic gold Penny of Henry III, found in a field in Devon, are difficult to miss.  The £540,000 it realised at auction was certainly impressive. However, looking into the history of this coin, as kindly provided by Dr David Carpenter in his introduction, throws up many links to the Middle East and its coinage. 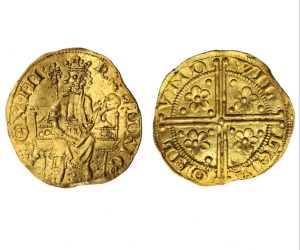 As we know, there were not gold coins circulating in England at the time, but their use in trade was firmly established in the Islamic world even by Saxon times. One only has to think of the gold Coenwulf penny (sold by Spink in 2005) to see that much of the inspiration for the design came from Islamic coins encountered through trade.

Dr Carpenter remarks that at the time the gold Penny was struck Henry III was amassing gold for the Crusades, and then, when it was no longer required for this, he was funding an expedition to Sicily, in order to install his son, Edmund, as king. Both these places used gold coins in trade.

Lots 44 and 46 in the current Spink Indian & Islamic coin auction are examples of typical Crusader Bezants produced by Europeans to act as currency while in occupation. The first is attribute to Acre in the mid 12th century, and is in the style of a Fatimid coins of the time. Lot 31 is the exact prototype of this coin: a Dinar of al-Amir, struck in Misr (Egypt), around 50 years earlier. It is very difficult to tell them apart, so the Crusader Bezant would easily pass as currency in Acre. Lot 46 is a crusader coin of Tripoli, issued by Bohemond IV of Antioch (1187-1233). It was inspired by the Dinars of the Fatimid caliph al-Mustansir (1036-94), but in this case it is easy to spot the difference as the letter ‘B’ appears above the obverse legend, and ‘T’ on the reverse. Original coins of al-Mustansir are on offer in lots 28 & 30.

Dr Carpenter mentions that some of the gold collected by Henry III came in the form of ‘Byzantine Bezants and Islamic half-pennies of Murcia.’  It is easy to forget that much of southern Spain was under the control of a branch of the Umayyad dynasty until the 11th century, and various local Islamic polities occupied strategic towns well into the 14th century.  The coinage that these areas produced was naturally Islamic in nature, and continued to be so, even after the Muslims were ousted. Lot 43 is a typical example of this, produced in Toledo, but by the Christian ruler Alfonso VIII (1158-1214). However, the only obvious signs of the transition is the Christian cross and the letters ‘ALF’ on the reverse.

For an example of the typical ‘half-pennies of Murcia’ one has to look no further than lot 23. This is Half-Dinar of the Almohads of North Africa and southern Spain. The full Dinar was often referred to as a Dobla. It is very rare to find a mint name on Almohad  Dinars or Half-Dinars, but some of them bore the name ‘Mursiya’ (Murcia). It is likely that the anonymous, mintless types, such as lot 23 circulated on both sides of the Mediterranean, and so examples of this very coin were held in the ‘wardrobe’ or treasury of Henry III and may have been melted to produce his gold Pennies.

So, although to most collectors the first gold pennies of England are well out of reach. These contemporary and equally interesting gold coins can still be acquired for the price of an English Sovereign.