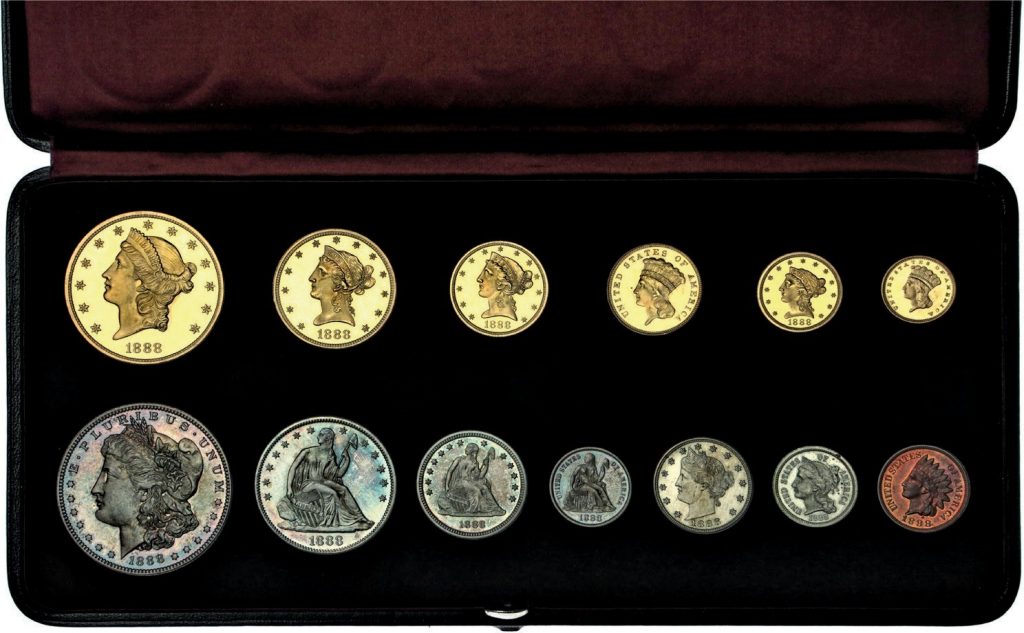 There are moments in the numismatic calendar that stand alone – sometimes as a bellwether of market forces in a given period – or simply as a ‘where were you?’ moment in the traditional decades-long cycle of the coin industry. Spink’s name stands proud globally at the apogee of these auction rarities, having proffered defining moments in English and American numismatics in recent years. Whether it is the Horace Hird or Dr Erik Miller cabinets, or the sale of the newly-discovered and record-breaking ‘EG FECIT’ Continental Currency Dollar and 1876 CC Half-Eagle, these events have the opportunity to complete collections as much as they inspire entirely new interests. The same legacy will undoubtedly be borne out for the forthcoming sale of the truly extraordinary and undocumented 1888 ‘Full US Proof Set’ – believed to be the only intact and original as-issued-from-the-mint set in private hands. Only the original sets in the Smithsonian and American Numismatic Society cabinets match its grandeur, both having been acquired within the first decades after production.

Since then other sets have surfaced, notably at the Garrett dispersal at the March 1976 ANA; lamentably this was sold individually, robbing the community of a fourth original set. In 2010, William Longsworth Carson achieved the rare feat of creating a 13-coin composite set that grossed over $208,000, but sadly this had been put together in recent years. So rare is this an auction offering therefore, that one must trawl the annals back to the cabinet of John Story Jenks in 1921 to find an original offering of the six gold Proof 1888 coins. Not even the legendary Parmelee had such a set sale in his groundbreaking sale of 1890. In the Spink annals, only the sale of the remarkable Byron Reed collection for the benefit of the City of Omaha in 1996 matches this momentous opportunity (we hasten to add, when some of our current specialists were still in nappies – or should that be diapers?)

How then is it that this remarkable American rarity ended up in England? Why is it housed in a contemporary custom-made coin case branded to an unfamiliar name in numismatics? How has it survived unscathed since the year of the Whitechapel horrors? Lest I spoil the extraordinary tale of the Fletcher family featured in our auction catalogue, I share some snippets of lore to contextualise the scarcely-comprehensible chain of events that brought these coins to English shores 134 years ago. 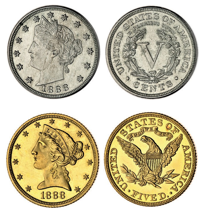 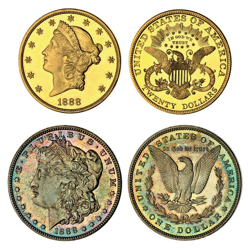 The story begins some half-century earlier, when the Stoneclough Paper and Bleaching mill at Kearsley, Lancashire was founded. Like many fledgling enterprises, it struggled in its opening years of operation, not least because it was subject to the perilous ‘Luddite’ riots sweeping Britain at the time. Paper had traditionally been highly labour intensive using vat mills to process the pulp. New machinery was fast sweeping long-standing careers away. The influx of cheap supplies from continental Europe following the cessation of the Napoleonic threat further exacerbated the issue. Around 1830, with the arrival of Robert Fletcher to the business, the shrewd step of manufacturing specialised papers emerged. Within a generation, Stoneclough would become renowned for its highly quality tissue papers and grass-bleached materials with specific anti-stain, anti-scratch qualities that were found to be highly suited to the jewellery and silver trade at Sheffield and Birmingham.

The second generation of Fletchers would take the helm in the early 1860s. Never far from wider geo-political issues, the firm took a particular interest in the unfolding events of the American Civil War. Their traditionally political liberal leanings would take on ‘small c’ Conservative shades in its aftermath. With this focus on America, it is hardly surprising that the brothers championed the push into the international paper trade, being one of the very few English firms to attend the Centennial Exhibition at Philadelphia in 1876. Awarded the Gold prize for ‘the exhibition of coloured tissues and satined papers’, the Judges found: ‘the paper is good and the colours fine, varied and remarkably well graduated. The tasteful arrangement of this display challenges the visitor’s admiration and surpasses any of its kind.’ This feat would be repeated at the Paris Exhibition in 1878 and twice more at London expositions in 1884 and 1885. In November 1887, John Robert Fletcher travelled to New York to meet with his American representative Harry F Leddy. His trip would be curtailed by the sudden death of his father, leaving Leddy to handle affairs on the East Coast. His report to the New York Paper Trade Journal in the Autumn of 1888 is particularly enlightening:

“Business has been very good, but slacked off somewhat about election time, but it has recovered, and is now going on at a good rate. We have done immense business in our coloured tissues and are now doing a large trade in copying papers. Prices are very steady.” 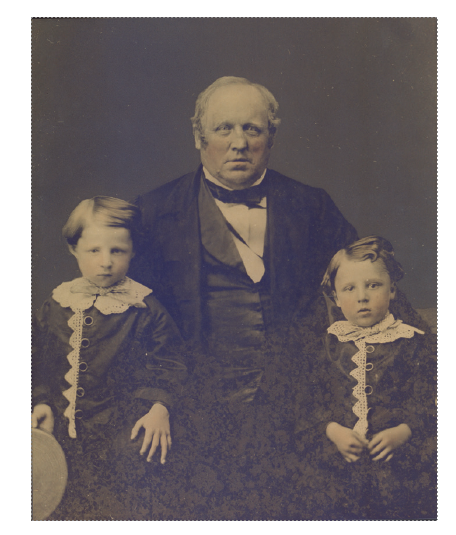 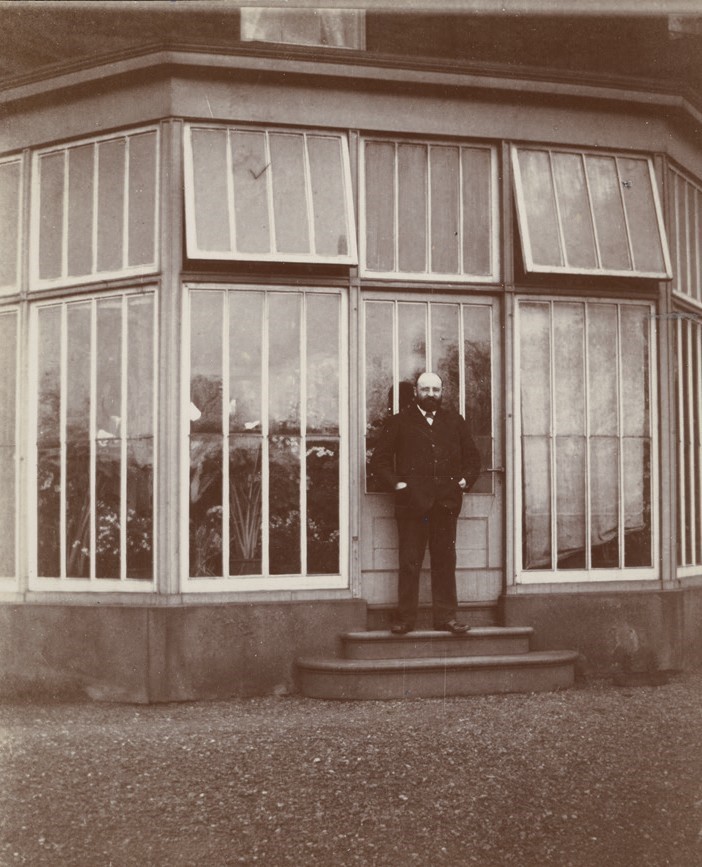 Got an issue? Get tissue!

So too is the surviving correspondence from the US Mint at Philadelphia which reveals authorisation by the Director ‘to purchase one ream of tissue paper and pay for the same out of the profits on medals’ (NARA RG104, Entry 1, Box 163). While this particular exchange occurred in May 1890, surviving archival records show multiple communiques throughout the 1880s between the Director and the Treasury granting such orders of necessity. It is tantalising to think that one such order introduced the US Mint to Fletcher, particularly given the ideally-suited scratch-resistant and anti-tarnish nature of his product for silverware and jewellery. The strict control over the acquisition, purchase and delivery of Proof sets through the Superintendent of the Mint ensures that any such purchase by Fletcher or his agent Leddy must have taken place prior to 2nd January 1889 (NARA RG104 Entry 1, Box 155) when the dies of the previous year were destroyed.

Even more fascinating is the contemporary order made by one John Day Knox, friend of Frank May, Chief Cashier of the Bank of England. In writing to Superintendent Fox, he asked: “I wish to purchase for my friend, F May, Chief Cashier of the Bank of England a set of “proofs” of the current coins of the United States. I understand that only a portion of these coins of the current year can be had at the Mint. Can you inform me where I can purchase a complete set of last year? Is there any law which prevents the Supt from striking complete sets of proofs for the current year, or from holding proof sets of previous years? You will much oblige me if you inform me how I can obtain the coins and oblige my distinguished friend.” 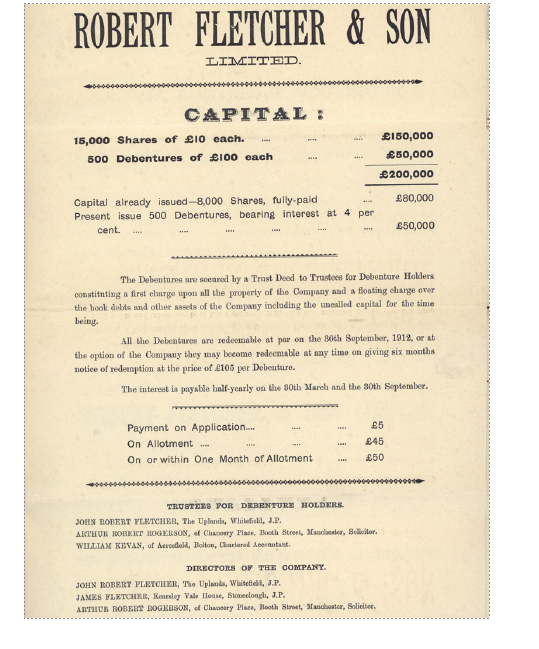 It would not be until November 1889 that the new Superintendent Bosbyshell acquiesced his request, but no sooner had the coins arrived in London, than Knox would forward on the following complaint:

“During the year 1888, I requested your predecessor to forward to my friend, Mr Frank May, Chief Cashier of the Bank of England, London a complete set of proof coins of gold and silver. He found some difficulty in furnishing a complete set for that year, but wrote me that he had obtained some of the coins of an employee of the Mint, and that they had been duly forwarded. I accordingly paid for the full set at your regular rates.

My friend Mr May subsequently wrote me that some of the coins forwarded to him were not proper and I replied that I would endeavour at some future time to send him a complete set. I understood the Director of the Mint in Washington to say, the other day, that a complete set of proofs could be sent of the coinage of the present year.

Will you please inform me if this can be done after the expiration of the present year and also if any complete set was subsequently sent to the Cashier of the Bank of England. Please also advise me as to the cost of a complete set of silver and gold coin and oblige.”

In essence Fletcher achieved what the Bank of England, Parmelee and Jenks could not, a full US Proof set for 1888. While this feat should be rightly lauded in and of itself, the fact the Fletcher descendants have managed to retain the set in its original presentation state renders this opportunity entirely unique in global auction annals. 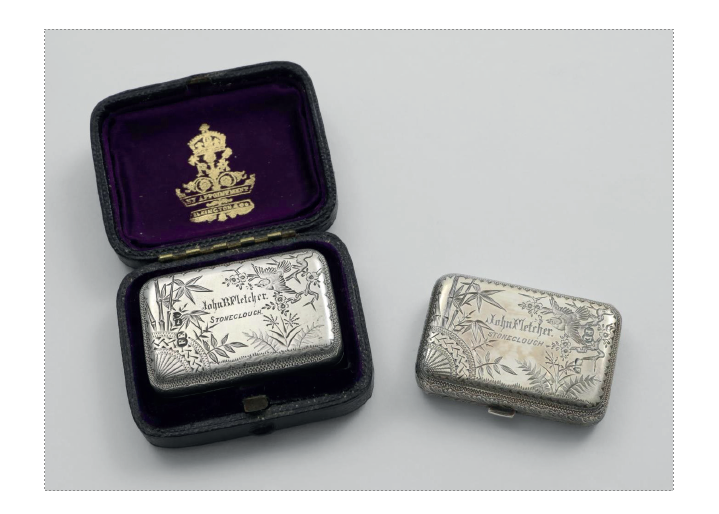 The John Robert Fletcher 1888 Full Us Proof Set will be offered for sale at Spink London on 15th September 2022.