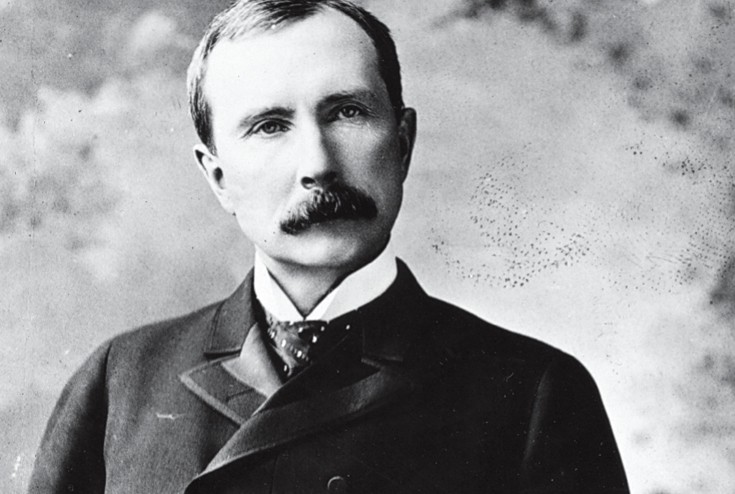 The legacy of the Standard Oil Trust is very much with us today with brand names in the oil industry familiar to us all: Conoco, Amoco, Chevron, Exxon, Mobil and Pennzoil. These all emerged from the breaking up of the Trust in the late 19th century.

The Trust was established as the main vehicle of the oil monopoly in the United States at a time when 85% of the world’s crude oil production came from the wells in Pennsylvania.

The certificate featured in this article represents a tactile reminder of this infamous company and the part it played in financial history. It is signed by two of the original three founders of Standard Oil; JD Rockefeller as President and Henry M Flagler as Secretary.

These two giants of the oil industry met through their shared work in the buying and selling of salt and grain; Rockefeller being at the time a grain agent. As the oil industry grew and the demand for product increased Rockefeller saw an opportunity to enter the market, then centred around Cleveland, but lacked sufficient capital to set up. He approached Flagler and with another partner they slowly evolved into Standard Oil, which by 1872 was a big player in the business refining some 10,000 barrels a day. Whereas Rockefeller is a familiar name and associated with great wealth, Flagler (unless you live in Florida) is less well known, but his role was paramount in the development of the Trust.  Rockefeller, when asked about the success and methodology of Standard Oil commented, “No Sir. I wish I had the brains to think of it. It was Henry M Flagler.”

Key to their success was a policy ruthlessly implemented to buy out smaller refiners, freeze out other competitors, improve efficiencies, undercut the competition and establish a monopoly to control prices. As they set about this with huge success, their attack on the refiners was called ‘The Cleveland Massacre’. At its conclusion, Standard owned 22 of the 26 operators and could dictate the supply and demand.

At a time when ‘Robber Barons’ in the USA, as they were termed, were using financial shenanigans and bribery and corruption to build vast fortunes in railways, steel, sugar – and any commodity or industry big enough, which relied on lots of small producers – the actions of Standard were not unusual, but their methodology was certainly new.  Control all production, control all distribution and combine all the companies under control into one huge monopolistic entity: The Standard Oil Trust.

Standard owned their own pipelines, railroad tank cars and home delivery network (for Kerosene for lamps). They investigated other uses for their product and were responsible for Vaseline and chewing gum amongst others.

By the 1870s they controlled 90% of oil refining in the USA, and thus most of the worldwide supply.

However there were two areas they did not have in their power: wells and the initial shipping. The first battle was with the powerful Pennsylvania Railroad, not an easy target, and after a titantic struggle worthy of its own book, the railroad acquiesced and sold all 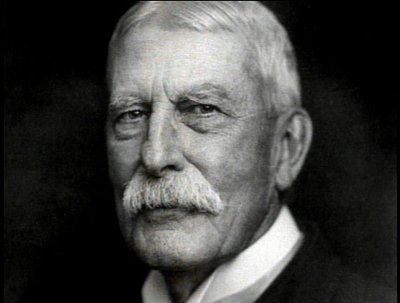 its assets to Standard. Buying the wells one by one was a far easier target. As they grew and had a portfolio of over 40 companies, both large and small, they consolidated them all into one corporation of corporations; nine Trustees ran them within the Trust.

The New York World described the Trust as “… the most cruel, impudent, pitiless and grasping monopoly that ever fastened upon a country”.

Now economies of scale, ruthless efficiencies, as well as direction and purpose, were centralised. Their grip on the industry was total. With 20,000 wells, 4,000 miles of pipeline, 5,000 railroad tank cars, railroad track and 120,000 employees they were gigantic. It was at the time the richest business in the world.

No government nor public welcomes monopolies beyond their control and both the Federal and State legislatures introduced laws to limit the scale of their influence. Again worthy of a book itself, the battle between them was ferocious and employed corruption on a grand scale. But eventually the Trust’s control was broken by a combination of anti-trust law and other events taking place beyond the USA; oil was progressively found in Asia and in Russia. Standard responded by moving into natural gas and perhaps its most recognisable legacy today, in the form of fuel for the new automobiles (which at the time was regarded as a waste product).

At its peak Standard’s assets were worth $42 million, or $1.2 billion today; Rockefeller at his peak was worth $318.3 billion, so three times

Bill Gates’ current worth. This fortune remains to be surpassed. Today the Rockefeller fortune is estimated at $11 billion.

So what of the brains behind the business? Well, Flagler remained on the Board but began to follow his own path in a somewhat similar vein. He started by buying a hotel in Florida, the Ponce de Leon, and from there a railway – the Florida East Coast. Using the line, he pushed it down the East coast, establishing hotels and businesses en route, from West Palm Beach to Biscayne Bay. He is regarded as the father of Miami, but when his name was put forward as the name for this new small town, he demurred and suggested using the Indian name, “Mayaimi”, which stuck. His fortune at death was nowhere near that of Rockefeller, but was still a tidy $60 million in today’s terms.

Spink hold regular sales of old Bond and Share certificates and many, like the Standard Oil Trust, are both highly decorated, as well as bearing important signatures, from Monarchs to Robber Barons, Prime Ministers to Dictators. They chart the rise of joint stock companies from the South Sea Company in the early 18th century to the 1940s worldwide, as well as the rise of nations through the issuance of just as attractive colourful bonds. They are a rich source of history – from Monarchs to Moghuls. 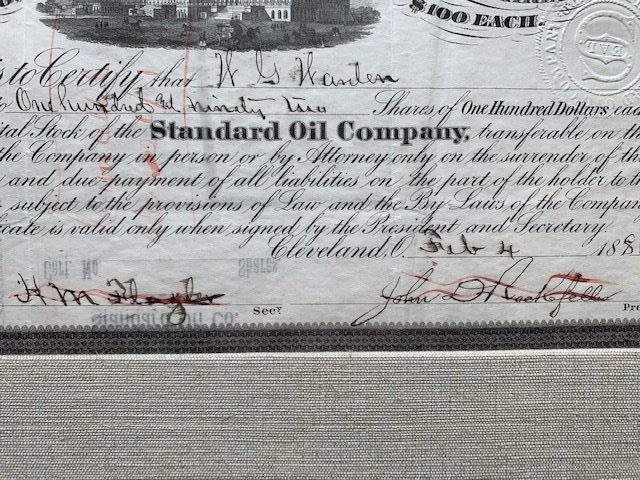 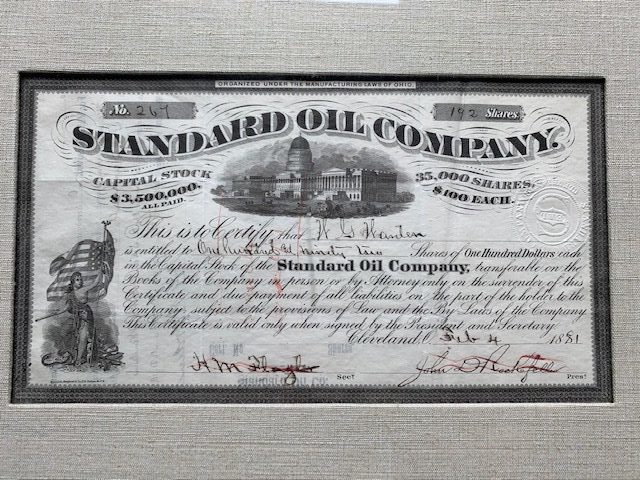